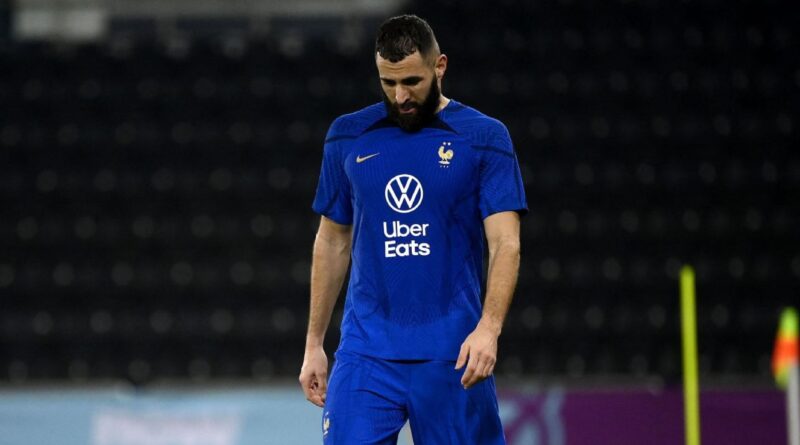 The 2022 World Cup in Qatar is a tournament like no other in that it starts just a week after the domestic season was put on pause.

Unsurprisingly, that has meant a host of injury issues, given that a three-week injury can rule a player out of the World Cup entirely, where previously they would have had several weeks to recover prior to the tournament’s kickoff.

There are some big names missing, but who are they? And which players are still struggling to prove their fitness?

Benzema suffered an injury to his left thigh during training on Saturday in Doha. The 2022 Ballon d’Or winner felt a strong pain in his thigh during a sprint toward the end of the training session and, after undergoing an MRI, it was confirmed that he had suffered a muscle tear that would need three weeks of recovery time.

“I’ve never given up in my life but tonight I have to think of the team, as I have always done,” he said. “So reason tells me to give my place to someone who can help our squad have a great World Cup. Thanks for all your messages of support.”

Mane, 30, picked up an injury in Bayern Munich’s 6-1 win over Werder Bremen on Nov. 8. He was substituted on 20 minutes with the team describing it the day after the match as an injury to the head of the fibula bone in his lower right leg.

Despite the injury, Mane was included in the Senegal squad for the World Cup and was expected to miss at least their first game of the tournament against the Netherlands on Nov. 20. However, the team revealed in a news conference on Thursday that further scans on the two-time African player of the year showed he would require surgery and would not be able to play in Qatar.

Werner was ruled out due to an ankle injury, his club RB Leipzig said on Nov. 3. The 26-year-old, who has 24 goals in 55 appearances for the national team, was taken off in the first half of Leipzig’s 4-0 Champions League group-stage win against Shakhtar Donetsk on Wednesday after sustaining the injury in the 13th minute.

“This piece of news is extremely bitter,” Germany coach Hansi Flick said. “I feel very bad for Timo personally because he will miss the World Cup which he desperately wanted to play in.”

Meanwhile, Marco Reus’ career has been scarred by injuries more than most. After the 33-year-old Borussia Dortmund forward watched his Germany teammates win the 2014 World Cup from home and missed Euro 2016 and Euro 2020, he now has to sit out the 2022 World Cup as well due to an ankle injury.

Florian Wirtz, 18, is also missing. He is regarded as one of the best young prospects in Europe but was ruled out for at least six months after tearing the ACL in his left knee during the first half of Leverkusen’s 1-0 defeat to rivals Cologne in March.

Wijnaldum’s participation at the World Cup was ended after he fractured the tibia in his right leg in August. The midfielder was training with Serie A club AS Roma and despite not being included in Louis van Gaal’s Netherlands squad for the Nations League matches in June, he was tipped to make the World Cup squad.

“Sometimes football can be s—,” Roma coach Jose Mourinho said. “In only two weeks, Gini became one of us because of his human qualities [his football qualities we already knew]. Sadly, in a very unfortunate accident he had a bad injury that will keep him away from playing for a long time.”

Tuesday, Jota was ruled out due to a calf injury suffered on Oct. 18. The 25-year-old was taken off on a stretcher deep into stoppage time during Liverpool’s 1-0 Premier League win against champions Manchester City.

“Really not good news, yes he will miss the World Cup,” Liverpool manager Jurgen Klopp said. “Pretty serious injury in the calf muscle and now the process starts. That’s it pretty much. All the rest will now follow in the next few days. Very sad news for the boy, for us as well and for Portugal. … I don’t want to put a time on [his return]. It will be a long time.”

Chelsea defender James was not included in England’s 26-man squad for the World Cup after sustaining a knee injury against AC Milan last month. The 22-year-old was in a race against time to be fit and, in a statement on social media, James said he was “devastated” and added that he “truly believed” he could help the team in Qatar.

James flew to Dubai to undergo a specialist recovery programme and had begun running outdoors at Chelsea’s Cobham base, but following regular dialogue between the club doctors and England’s medical team, the right-back has been deemed too much of a fitness risk to take to Qatar.

Also missing for England is Chelsea left-back Ben Chilwell, who pulled up in stoppage time of Chelsea’s 2-1 Champions League win over Dinamo Zagreb, with scans showing he had “significant” hamstring damage.

Mexico manager Gerardo “Tata” Martino had been holding out hope that Tecatito may have been able to return to fitness in time for the tournament in Qatar and included him in El Tri‘s provisional 31-man roster two weeks ago. But Martino announced earlier this month that Corona would be ruled out.

The Sevilla player fractured the fibula and suffered ligament damage in his left ankle during a training session in August. Shortly after suffering the injury, the LaLiga club announced that his recovery would be four to five months, making it unlikely that he would be ready in time.

On Nov. 5, Martino explained what had changed since he put Corona on the provisional roster: “The decision was made because we had a triple communication with Jesus, where we spoke with the doctor, the physical trainer and myself. [Corona] directly told me that he was not in a position to fight for a [World Cup] spot.”

Juventus midfielder Arthur, who is on loan at Liverpool, has been out of action after suffering a thigh injury in October. Arthur underwent surgery in London and is set to be out until the new year after making only one senior appearance for the Reds.

Brazil defender Diego Carlos is also missing after he ruptured an Achilles tendon in Aston Villa’s victory over Everton in August.

Spanish media reported that Lo Celso, who is on loan from Tottenham Hotspur, had exhausted all possible options to be on the flight to Qatar, including consultations with specialists from different parts of the world for a less invasive treatment.

One of Morocco’s most talented players, Harit was injured in his club’s final game before the World Cup. Marseille’s 3-2 Ligue 1 win over Monaco at the weekend saw the midfielder suffer a cruciate ligament sprain after a collision with France’s Axel Disasi.

Manager Igor Tudor said: “From what we know, it’s a very big injury. He got injured just before the World Cup, we talked about it all week, I’m very sad.”

“As you can imagine, beyond the physical pain, it’s hard to see the World Cup dream fly away a few hours before living it,” Harit said.