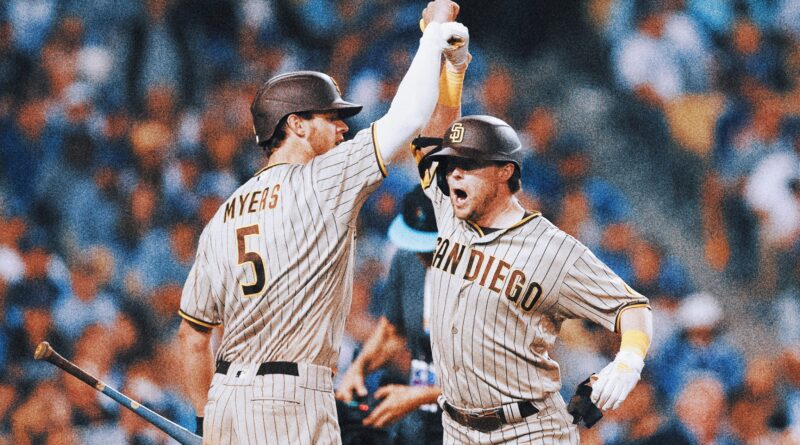 LOS ANGELES — Over the regular season, the Padres played the Dodgers like a team on the verge of relegation. The Dodgers beat them 14 times in 19 tries, more than doubling San Diego’s offensive output.

The most dominant team since integration earned the status of heavy favorites entering this National League Division Series, no matter the Padres’ momentum from toppling the 101-win Mets.

But over the series’ first two games, the Padres have played the Dodgers like their equals, if not their superiors. With a taut 5-3 win in Game 2 on Wednesday at Dodger Stadium, they evened this series. And it’s not just the back-to-back 5-3 outcomes indicating the balance between these teams; it’s also how the Padres have played. Seven relievers have supplied spotless relief. Hitters across the lineup have delivered in key situations. And their stars have performed.

Manny Machado chats with Tom Verducci about the San Diego Padres’ spirited victory against the Dodgers and his home run off Clayton Kershaw.

The teams traded early solo strikes from their No. 3 hitters Wednesday. In the first inning, Manny Machado swatted a hanging slider inside the left-field foul pole, and Freddie Freeman cleared the center-field wall with a misplaced cutter. Max Muncy matched their efforts in the second, while Clayton Kershaw held serve by striking out two Padres with two men in scoring position.

After the Padres put together another rally in the third and cashed in two runs, Trea Turner again tied the score with a third-inning solo shot.

It stayed that way until the sixth, when the Padres pounced on Brusdar Graterol, the first man out of the Dodgers’ bullpen. Brandon Drury redirected his first pitch into center field for a single. When Turner looked away from a potential double-play ball that followed, the Padres seized on the gift. Jurickson Profar slapped a run-scoring single into right.

San Diego scored once more, in the eighth, when Jake Cronenworth sent one more home run into the bleachers.

Padres manager Bob Melvin leaned on setup man Robert Suarez and closer Josh Hader to obtain 10 outs and eked two more out of swingman Nick Martinez. Much of the rest of his bullpen had been exhausted by Mike Clevinger’s short start in Tuesday’s Game 1, but Melvin will have everyone rested when this series resumes Friday in San Diego.

“It’s probably as back-and-forth a game as you are going to see,” Melvin said afterward. “A lot of drama to it.”

It was the Dodgers, not the Padres, who supplied additional drama with their mishaps. (And there was the hurt goose that landed on the field and refused to leave.) Turner committed two flubs, while what looked a Juan Soto error might’ve instead been a deke that convinced Muncy to stay at first base on a drive that should’ve netted him second.

At third base, Machado repeatedly restricted the Dodgers’ offense, especially in the fifth inning, when he performed a slick sliding play on Turner’s 103 mph grounder. More than 50% of the time, according to Statcast, Turner’s drive would’ve been a hit. In Machado’s hands, it looked like an easy out.

San Diego’s strategy was to ambush Kershaw. In the fourth inning alone, four batters swung at Kershaw’s first pitch. By then, it was clear he could not land his curveball for strikes. So they knew they would be receiving something around 90 mph, either his slider or his fastball.

The Dodgers deployed a similar tack against Yu Darvish, who offers far more potential pitches. After Melvin wagered that Darvish could get him through the sixth, it looked like the bet might backfire. But Suarez entered just in time and induced the sort of double-play that enabled the Dodgers to escape with a win in Game 1. Shortstop Ha-seong Kim’s elite arm bridged the gap just in time.

This time, it was the Padres who escaped. They must slay the dragon twice more to advance. Even in what is now a best-of-three series in which they have home-field advantage, they will remain the underdogs. But this series looks far closer than it did 48 hours ago — or at any point in recent years.

“Obviously, I’ve lost a decent amount to the Dodgers over the years,” said Wil Myers, the longest-tenured Padre. “But winning this series right here would make up for all of it.”

Before they embarked on a joyous bus ride home Wednesday, players spoke of the Padres’ brand of baseball: spirited, athletic, efficient. If they continue to play like that, Profar said, they can win.

“It’s clicking for us now as a group,” Machado said. “It’s just a matter of wanting it. We want to get to the World Series and bring home a championship to San Diego.”