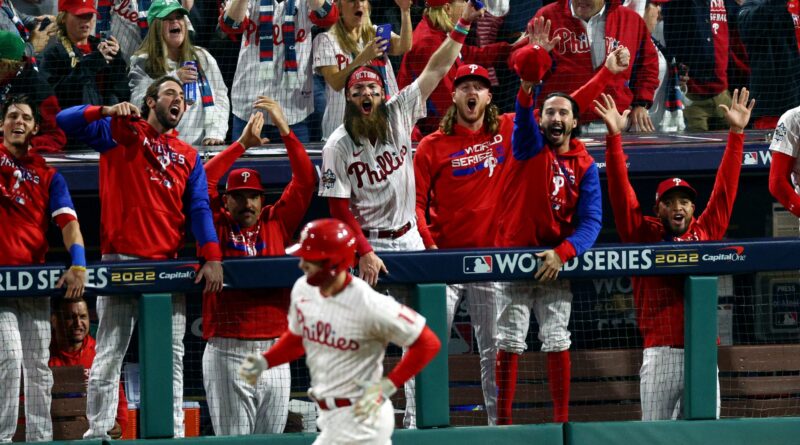 PHILADELPHIA — Lance McCullers Jr. was so disappointed in himself, he nearly let his body go limp. In the first inning of Game 3 of the 2022 World Series, he started Bryce Harper with an awful version of his best pitch. Harper saw the hanging slider coming and calmly swatted it into the bleachers.

As bedlam enveloped Citizens Bank Park, McCullers caught himself falling off the mound. He faced much frustration here Tuesday night, for Philadelphia followed Harper’s strike with four more home runs in soaring to a smooth 7-0 victory over the Houston Astros.

The Phillies so dominated a typically stout pitcher, they inspired an idea that they had seized on a tip within McCullers’ delivery. That started, of course, with Harper.

Bryce Harper hit a two-run home run to give Philadelphia an early 2-0 lead in Game 3 of the World Series.

For as exceptional and seemingly omnipresent as he has been this postseason, Harper does not actually appear on ballfields all that often. Because of his May elbow injury, he is not playing the field. He does less lingering on the bases and more trotting around them.

But on the rare occasions when Harper has been within the purview of television cameras, he has demonstrated an unusual awareness of their precise location. He frequently turns to them with a message as he completes his home runs.

It’s certain, then, that Harper knew cameras would capture him shouting from the dugout, after his first-inning homer, to capture Alec Bohm’s attention in the on-deck circle. Within seconds, speculation sprouted that Harper had alerted Bohm to a tip within McCullers’ delivery. When Bohm began the next inning with his own home run, the theory proliferated.

It is far more likely Harper was recommending an approach to Bohm than that he was revealing a secret he had uncovered. For one, both Harper and Bohm saw only one pitch each in their first at-bats, and they weren’t the same pitch. For another, McCullers was pitching out of the stretch to Harper but out of the windup to Bohm. Considering the disparate settings, it strains credulity that Harper could have detected and supplied Bohm an actionable, valuable piece of information.

Repeatedly queried about that sequence, the Phillies offered differing answers. Bohm, smiling, said Harper had told him nothing. Asked if that nothing had helped him, he grinned once more and said it might have. Harper skirted the question. Brandon Marsh said Harper had told Bohm “nothing that we didn’t go over in pregame.” Their pregame meeting surely covered McCullers’ propensity for off-speed pitches. No starter in the sport throws fewer fastballs.

The Astros strongly denied the suggestions that McCullers had inadvertently signaled what was coming.

“This,” McCullers said, “has nothing to do with tipping.”

No matter the facts, the suspicion will stand: McCullers might have been tipping his pitches. There is circumstantial evidence.

Phillies left-handed hitters were three times as likely to hit a McCullers pitch for a home run Tuesday as they were to swing and miss. No pitcher had ever surrendered five home runs in one postseason game. In the World Series, no pitcher had permitted even four in 55 years.

It is also true that McCullers threw some terrible pitches. He hung sliders. Some of his sinkers didn’t sink.

“To be honest, he just left pitches in the heart of the plate today,” J.T. Realmuto said. “We have a really good lineup. It’s not like we crushed out 12 hits on him and hit rockets all over the place. It was, when he did make that mistake, our guys took advantage of it.”

Yes, these are the 2022 Phillies. Longtime executive Dave Dombrowski built them in a post-lockout haste on one guiding principle: slugging. Most of them can crush mistakes. Harper can hit everything. And this city has come to love all of them the way they are.

Tuesday’s scene in Philadelphia, delayed by a day because of rain, was beyond raucous. In this World Series, the Phillies possess a clear advantage in home-field advantage. Citizens Bank Park does not feature a roof, but Minute Maid Park’s enclosed atmosphere is no match for a city this eager to celebrate together.

Dozens of current and former Philadelphia sports stars, from Julius Erving to Chase Utley, were in attendance. Fans piled into the parking lots and bleachers hours early to guzzle disinhibiting beverages.

After an elongated wait, the 8:05 p.m. ET first pitch immediately brought the fans something to cheer. Just as he did to Zack Wheeler in Saturday’s Game 2, José Altuve whacked Ranger Suarez’s first pitch Tuesday night. When Nick Castellanos sprinted in and snared it, he could not hide the degree to which he was impressed with himself. He raised both his arms and held them there for several seconds, soon pointing to his adoring supporters in the right-field bleachers.

“That,” Realmuto said, “was about as loud as I’ve ever heard the stadium.”

Minutes later, it was louder, loud enough that local seismographs registered shaking. Harper had homered. The region erupted. The crowd did not produce small earthquakes all night long, but at no point did it let up.

“I can’t imagine what it’s like for the Astros right now,” Castellanos said. “They just really have zero breathing room.”

The Phillies have some. They did not only win Game 3. They won it without calling on any of their three best relievers: Zach Eflin, José Alvarado, and Seranthony Domínguez. Each of them will now be available in both Games 4 and 5. The Phillies have carved out a path toward clinching this World Series at home, beginning with ace Aaron Nola taking the mound to begin Wednesday’s Game 4.

Tuesday’s route seemed simple. Suarez cruised through his allotted five innings. The Astros mounted two-out rallies in the second and fifth innings, but punctuated neither with hits. Four of the Phillies’ lowest-leverage relievers followed Suarez with a scoreless inning apiece while Bohm, Brandon Marsh, Kyle Schwarber and Rhys Hoskins added homers in support of Harper.

Everything began, as it often does, with Harper. He swung. His teammates followed his lead. How specific that lead was, we may never know.