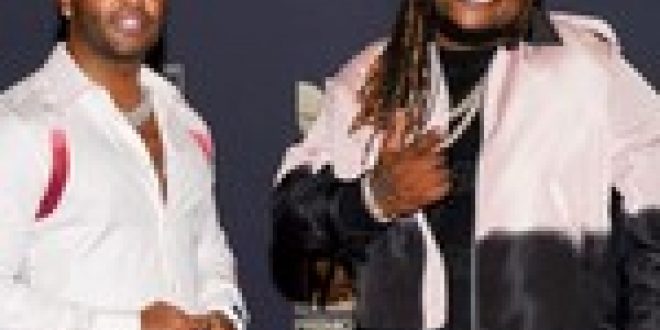 “I am grateful to the Latin community and to everyone who feels oneness with our mission to bring equality, fairness, justice, unity, and harmony,” Santana said in a statement. “We wake up every day to touch people’s hearts with our music, spirits-vision, and to make a difference in the world, for the highest good for life, people, and the planet. It is a blessing to be a blessing. We thank the Hispanic Heritage Foundation and PBS for this glorious honor.”

Zion and Lennox will celebrate 20 years of career with not one, not two, but three back-to-back concerts in the emblematic Coliseo de Puerto Rico in San Juan, Puerto Rico. The Puerto Rican duo, composed of Félix Ortiz (Zion) and Gabriel Pizarro (Lennox), formed in 2000 in Carolina and released their debut album, Motivando a la Yal, in 2004. Since then, the duo has dropped countless reggaeton hits, including “Yo Voy,” “Hay Algo en Ti” and “La Player,” to name a few. Zion y Lennox will perform on December 2, 3, and 4. Tickets are already on sale via Ticketera.com.

Less than a year after launching his record label, La Base, distributed by The Orchard via WK Records and based in Puerto Rico, Wisin is expanding to a second location in the Dominican Republic, Billboard can confirm. La Base Music officially launched in the summer of 2020 with new signees Chris Andrew and Abdiel Larralde. La Base Music’s resident engineer and award-winning producers include Hyde Quimico and Los Legendarios, who have worked with Latin superstars like Daddy Yankee, Ozuna and Reik.

In celebration of his latest production, Piano y Mujer, virtuoso pianist Arthur Hanlon has partnered with multinational brand Yamaha, which will have him performing exclusively on Yamaha pianos. Faithful to the brand that sparked his love for music when he was only six years old and was his very first piano, Hanlon feels honored to be part of the Yamaha family. “ I love the Yamaha sound, which is perfect for Latin music: a nice high end, and at the same time, a deep, soulful bass end,” he expressed in a statement.

The partnership comes three months after the release of his album Piano y Mujer, where he teamed up with some of the industry’s most iconic female voices, including Kany García, Natalia Jiménez, ChocQuibTown’s Gloria “Goyo” Martínez, Evaluna Montaner and Nella for intimate performances of classic songs powered by his piano. The concert special is currently streaming on HBO Max and HBO Latin, and beginning July 4 it will be available throughout Latin America via the Sony Channel.

This week, streaming platform Pandora launched its new station called “La Vida in Pop,” which spotlights pop superstars and trendsetters in the Latin music realm, such as Camilo, Juanes, Anitta and Ricky Martin. The station features everything from ballads to reggaeton to crossover hits, honoring the music and artists that have made Latin pop universal. “La Vida in Pop is the renaissance of Latin popular music, the best in today’s Latin pop,” noted a press statement.