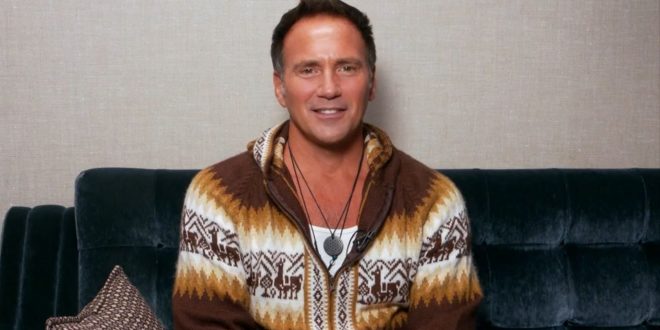 In 1992, Eric Nies was the first roommate to step into “a new world.” Fast-forward 29 years later: The New Jersey resident did not have the same experience as his roomies during a once-in-a-lifetime homecoming in January 2021.

During The Real World Homecoming: New York premiere — now streaming on Paramount+ — the original cast members all traveled back to the Big Apple in the middle of a global pandemic to reunite in their original Soho loft.

Becky Blasband, Andre Comeau, Heather B. Gardner, Julie Gentry, Norman Korpi, and Kevin Powell all arrived — and began to ponder Eric’s whereabouts. Soon, they were greeted by an “Incoming Message” on their television monitor. And Eric’s face appeared.

“Guess what I have?” Eric asked the MTV group, and they answered with a chorus of “No!”

Understandably, the six in Soho were dismayed.

“When Eric popped on the monitor, I knew these are times of COVID. So yeah, I added two plus two pretty quickly,” Andre stated in an interview.

Eric, who was isolating at a hotel, told the group he was feeling “okay” and did not have a fever.

“My vitals are stable,” he said. “I have to take another test today to see where it’s at.”

He emphasized that he loved everyone as Becky wiped away tears, an open-mouthed Julie listened intently and Heather cradled her face in disappointment.

“You all look so beautiful,” an emotional Eric told them.

Kevin vowed that they would try to see him and said that he had picked out their room (the men had planned to bunk together). When the gang broke it to Eric that they were back in their old abode, Eric became even more upset.

“I knew I was going to cry the whole time,” he said.

But it was Heather B who brought some much-needed levity to the situation.

“I brought all this organic sh*t that was against my whole comfort zone,” “The Happy Hour with Heather B” host declared to a sea of laughter. “I was ready for you, boo! You don’t do this to a Black woman. You don’t set me up, then let me down. I’m going to see you before we move out!”

Everyone vowed to “represent” Eric, and he made several more cameos throughout the inaugural episode. But his absence was noticeably felt, and Eric’s experience was unlike any the others endured.

“It was heartbreaking for me,” Eric recently told Entertainment Tonight. “I flew all this way 29 years later. We were coming back to be together and to find out that I wasn’t gonna be there with them physically — that was just heartbreaking. It was crushing.”

Be sure to keep watching the seven former strangers on The Real World Homecoming: New York on Paramount+, with new episodes being released every Thursday.