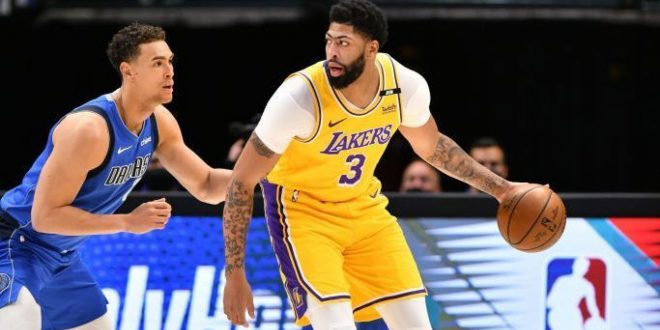 AD: Didn’t think about injury one time in return

There were 67 days, 30 missed games and five missed shots for Anthony Davis before he could finally stamp his return from injury with a bucket Thursday against the Dallas Mavericks.

After the Los Angeles Lakers star’s 19-foot step-back jump shot fell through the net with 4 minutes, 51 seconds remaining in the first quarter to put L.A. up by one, Davis furrowed his brow and shook his head as if to say, “About time.”

Davis, playing for the first time since Feb. 14 after needing nearly nine weeks to recover from a calf strain and Achilles tendinosis in his right leg, started for the visiting Lakers and was finished by halftime of L.A.’s 115-110 loss.

“I didn’t think about it one time tonight,” Davis said of his injury afterward. “Honestly, I just went out there and played. I think it can limit what you do if you’re out there thinking about your injury, so I just went out and played and not think about it. Just go out there and have fun and be excited to be back on the floor. That was my main thing. I was just excited to be back on the floor with the guys, so I never thought about it. I never did a limit to any moves. Wasn’t hesitant with anything, so that was a good sign for me.”

Lakers coach Frank Vogel had told reporters before the game that Davis would play only in the first half and his playing time would be restricted to the 15-minute range. Davis said afterward — perhaps as a preview of what can be expected from him on Saturday in the Lakers’ next game — that the minute range was actually 15 to 20, but it made sense he was kept to the low end after such a long layoff.

Davis finished with four points on 2-for-10 shooting, four rebounds, one assist, one block and one steal. He also missed both of his free throw attempts, and L.A. was outscored by 11 points in the 16 minutes he played. He didn’t have his normal defensive impact, either, as opponents shot 6-of-9 for 15 points when Davis was the primary defender, according to data compiled by ESPN Stats & Information.

“I felt fine,” Davis said. “My wind felt better than expected. I got good looks. I missed. That comes with time and being able to get those game reps. But I felt good out there. I felt really good. And could do some things that could give the team a little juice.”

Kentavious Caldwell-Pope said he got a glimpse of Davis’ old self when he started the second quarter off with Dorian Finney-Smith guarding him on the left block and spun right around him to get to the rim.

“The post-up he had, the spin move,” Caldwell-Pope said. “We definitely missed his presence down there.”

L.A. is still awaiting the return of LeBron James, who has been out the past month with a high ankle sprain, but it did get to see Davis playing alongside Andre Drummond for the first time.

“Being on the same court as AD has freed the game up for me a lot to do some of the things that I’m very good at, which is rebounding,” said Drummond, who finished with 14 points and 19 rebounds. “The focus is all on him. When he gets the ball, all five eyes are at him, but not only are they doing that, they’re leaving the best rebounder in the NBA wide open. Any shot he misses, I’m right there to clean it up.”

Dennis Schroder, who finished with 25 points and 13 assists in what Vogel called the point guard’s best game as a Laker, said that it was understandable that Davis was shooting a lot to try to find a rhythm, especially because his minutes were on such a short leash.

Schroder’s confidence in the team for the big picture wasn’t shaken at all by Davis’ slow start.

“I think for me, personally, if everybody is there in a seven-game series, I’ll put my money on us,” he said.

While the numbers suggested it was an inauspicious return for the Lakers big man, Vogel found plenty of positives in Davis’ mere presence on the court.

“It was great to have him back in a Lakers uniform and on the floor for us,” Vogel said. “He had a little bit of rust, but I thought he played extremely well. And we’re super excited to have him back out there. … Even though we lost, it was a really positive night for the Lakers in terms of where we’re going.”