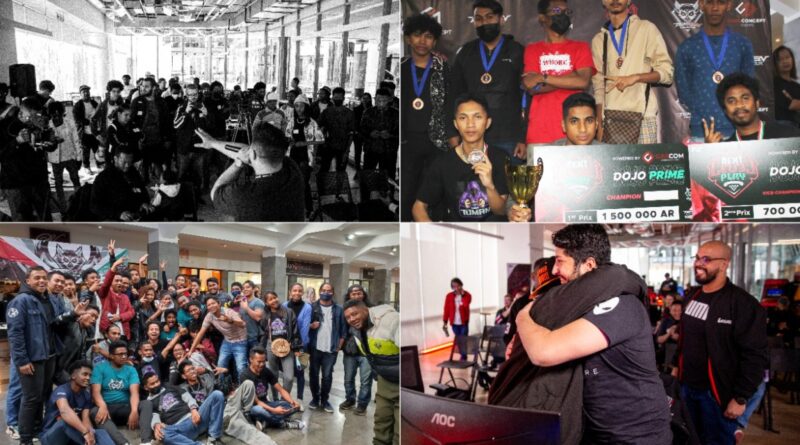 Cape Town — Video games are the largest entertainment medium in the world, according to data from Felix Richter on Statista. These days, gaming communities are as varied as the genres they support. The fighting game community in particular is one whose history can be dated back to the early 1990s when Street Fighter II ushered in an era of competitive 1v1 competition and whose legacy continues to this day with thousands anticipating the approaching launch of Street Fighter 6.

In South Africa and Madagascar, Tekken, another fighting game series, has garnered dedicated fanbases that regularly compete in both online competitions and at local in-person tournaments. More specifically, Tekken 7 has seen a greater rise in the number of new players joining.

While similar communities exist in multiple African nations – most notably Kenya, Sierra Leone, Nigeria and Mozambique – South Africa and Madagascar have also seen efforts from local players putting vast amounts of effort into getting their respective nations recognised on a greater scale.

I had the privilege of talking to two organisations whose grassroots efforts to push Tekken in local scenes have earned them much experience and have put greater focus on those that play the game.

Competition among fighting game players is frequent, intense and can be as much the start of a friendship as a rivalry. South Africa’s tournament scene has witnessed a great deal of growth over the past several years with more and more eSports organisations taking notice. Ultimate Gaming Championships (UGCZA) is the brainchild of two brothers, Junayd and Umar Bradlow. The pair have brought regularly scheduled events to players across South Africa since their first major tournament of Spring Showdown in 2018. Working in the creative field, they focus on film production and animation with the development and hosting of fighting game events being a strongly held passion.

“We have always loved fighting games since we were kids,” said Umar Bradlow. “Myself and Junayd have always been very competitive towards one another and fighting games were the best way to feed that rivalry.” The Johannesburg-born Bradlows first encountered the fighting game community in 2014, finding a great appreciation for tournaments. However, their journey into eventually becoming tournament ogranisers themselves was an unexpected one.

A bad experience at a poorly organised tournament inspired the Bradlows to enter the organiser space to deliver events of a calibur that would put the South African scene on a grander scale. “We went back home and brainstormed and right there we decided that we were not only going to make fighting game tournaments premium to the community but we were also going to make it the biggest eSport in South Africa,” Umar said.

A similar need to celebrate Tekken and put players’ skills on display was born in Madagascar where, in 2017, the island nation sought to bring about a revival of what had largely been an inactive tournament scene. “”Everyone was waiting for a miracle,” said Tekken Madagascar (TKM), the main organiser of tournaments for Malagasy players. “Everyone was thinking: ‘When will there be a big Tekken event? Why aren’t there big sponsors and tournament organisers interested in Tekken?”, the group said.

Taking matters into their own hands, and with the help of a local gaming lounge owner and co-founder of TKM, Michale Florin, the island community set to work to unite players once again. This grassroots approach at working with the community for the community was also a motivation of the Bradlow brothers who, through UGCZA, combined their flair of high-level video production with their passion for Tekken and sought out sponsors which, to date, have included sports clothing brand Puma, electronics firms AOC, Logitech, and energy drink giant Red Bull.

Gaming is a lifestyle

For the Bradlows, balancing that level of dedication with their professional lives is not easy. “The trick is that it’s a lifestyle, our careers and tournament work are all integrated into one another. We have dialed back on the amount of tournaments and focused on content and marketing for the community, which works perfectly into our work as we can show off our skill sets for possible clients and promote the community at the same time,” said Junayd.

Promotion of local players is also a goal for TKM. With over 532 active players, the Tekken series is highly regarded as a competitive eSport in the island nation where more than 61 tournaments have been held along with additional events centered on training sessions, outings and similar gatherings. TKM aims to promote the scene across both the island and the southern African region.

Like UGCZA, TKM faced a series of struggles during their early phase of tournament organisation; finding locations for venues, limited numbers of consoles and controllers as well as expensive and inadequate internet access, limited efforts to bring their goals to scale.

Perseverance, time and experience paid off however, and led to their creating regular events, most notably the Next Level Play series, monthly tournaments that see an average of 93 players per event compete together and which was a headline series for the Malagasy in the 2022 edition of the Tekken World Tour (TWT). The TWT is a global competition where players via regional split compete before facing off in a final event in Amsterdam in February 2023.

“eSport in Madagascar is booming now but is still in its first steps. We hope other communities will follow our lead, which will motivate us even more to go as far as possible to represent our country,” said TKM. The Bradlows had a similar opinion. “Our first impression of eSports in South Africa was similar to everyone else, that it’s the biggest growing sport in the world and that there is so much money in it. What we learnt very quickly is that there is massive potential just not enough infrastructure to give these amazing players a platform to grow, but it is slowly changing and doors are opening and brands are starting to want to get involved which is great to see,” said Junayd.

Getting local players to earn greater international attention has also been a major goal for UGCZA. “We want to see our best fighting game players going overseas for tournaments as well as having international players coming to South Africa to compete in our major events and just soaking up the South African local scene too. It needs to and will happen,” Junayd added.

Looking to the future

Both UGCZA and TKM are hopeful for the future of their respective Tekken scenes. By securing a venue for regular events, UGCZA aims to appeal to Johannesburg’s Tekken community with more events. “We finally have a home for the community… We’ve taken it back to the roots and are now situated at the Nexus in Randburg. We will be doing a lot of events to push the scene and build skills of the players,” Umar said. He added: “We will also be doing a really big tournament in December, 9-11th to be specific in partnership with rAge gaming Expo, and the event is called rAge Drive.”

The brothers – who have already produced a fighting game community documentary called A Fight to the Top which chronicles the journey of several of South Africa’s Tekken 7 competitors – also plan to produce a YouTube Series on the ongoing journey of how to organise tournaments and similar events in all their aspects, like marketing and production. “This is to help the scene and get more tournament organisers to come up so that we can have an amazingly saturated scene and push to make it easily accessible for everyone and make it the biggest eSport in South Africa.”

For Malagasy players, TKM hopes Madagascar will be able to integrate into the International eSports Federation, a global organisation based in South Korea that aims to have eSports officially recognised as a legitimate sport. The group also aims to grow the local scene along with players’ collective skill level. “Our actual average number of participants per event is 93. We hope that it will reach a hundred for next year.”

As for those who want to enter the tournament organing space? Both UGZA and TKM offered some advice on how to do so. “The biggest thing we can say is you have to have passion for the scene, you won’t make money for a long time, in fact it will cost you money, but as you grow so will the scene you’re in and your opportunities,” Umar said.

TKM offered a similar take. “It’s not the money that makes the project, it’s the project that makes the money. Many tournament organisers made this mistake. They think too much in terms of funds. When you think about money first and the project second, all the good ideas disappear because the lack of budget becomes a permanent blockage in your mind. Whereas if you do all the planning for the project and put the money at the end, you will at least have succeeded in setting up your project before your imagination runs out. All you need to do is believe in your project at all costs by following the previous advice. The money will come from the source and there are also many alternative solutions such as the service exchange or the goodwill exchange with partners and sponsors to reduce the costs.”