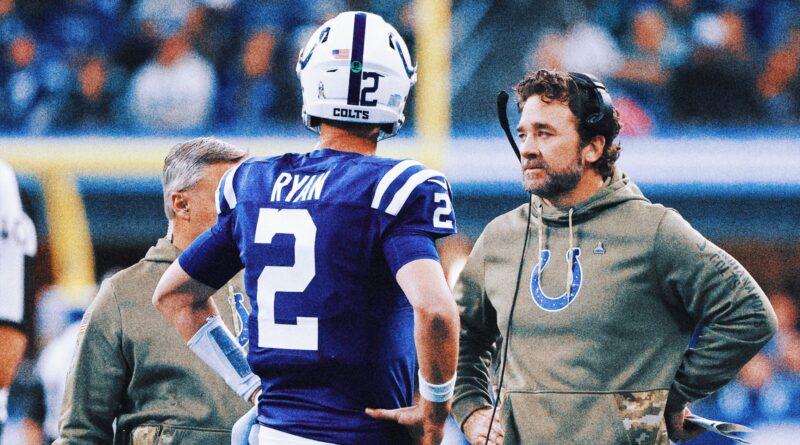 For at least a week, the Indianapolis Colts were riding high. Call it a honeymoon phase of sorts.

Interim coach Jeff Saturday and the franchise — after flipping off the unwritten laws of climbing the coaching ranks in Saturday’s hiring — beat the Raiders on the road to end a three-game winning losing streak.

After a tumultuous season, featuring the firing of Frank Reich, the Colts saw a reason for hope. Something to build on. The offensive line looked the best it had all season. Jonathan Taylor looked like himself. Matt Ryan, reinserted as the starting quarterback, led a game-winning drive. And putting it all together was Saturday, who — despite his lack of coaching experience — brought undeniable juice and leadership in a trying time.

“I’m not sure there’s a storybook ending any better for the first game,” Saturday said in Las Vegas.

But the fairytale is over.

In its place? The reality that has defined the 2022 Colts.

Like it has most of the season, the offense caved in on itself in Indianapolis’ 17-16 home loss Sunday to the Eagles. The Colts blew a 10-point lead in the second half to fall to 4-6-1 on the season. They have just an 18% chance of making the playoffs and a 2% chance of winning the AFC South, according to FiveThirtyEight.

“A lot of should’ve, would’ve, could’ves, right?” center Ryan Kelly said postgame. “But the NFL is not like that.”

After the Eagles took a 17-16 lead, the Colts had the ball with 1:20 left and a timeout. It was a great opportunity for Ryan, a proven clutch player, to put together a game-winning drive. He didn’t even have a chance, though. On third-and-9 from the Colts’ 40, Eagles defensive end Brandon Graham bulldozed his way through rookie left tackle Bernhard Raimann. Ryan was sacked for a seven-yard loss.

The desperation fourth-down attempt that ensued was made more difficult by right guard Will Fries, called for a false start. That turned a fourth-and-16 into a fourth-and-21, which ended the game (running back Deon Jackson could pick up just five yards before getting pushed out of bounds).

Those two moments — the sack and penalty — highlighted a game in which the Colts’ high-priced offensive line, a week after its best performance of the season, reverted to being the team’s Achilles’ heel.

Raimann and Fries, unproven starters, accounted for five of the eight penalties against the Eagles, costing 35 yards in drives that could’ve given the Colts a cushion. Ryan was also sacked four times in the second half after not being sacked once before halftime.

The most costly one? Late in the fourth quarter.

On a third-and-goal from the Eagles’ 5, with the Colts knocking on the door for a touchdown, Ryan was sacked for a 14-yard loss. Hassan Reddick beat Raimann off the edge.

That sack cost Indianapolis four points, leading to a field goal that gave it just a six-point lead. The Eagles marched downfield their ensuing possession for a touchdown (and PAT) that gave them the go-ahead score.

It wasn’t just the pass protection that was an issue. Taylor didn’t have the rushing lanes to operate. After eight carries for 49 yards and a touchdown in the first quarter, he averaged just 2.5 yards per carry on his 14 rushing attempts the rest of the game.

Sunday was a reminder of the sad state of the Colts’ offensive line, accounting for a league-high 19.5% of the team’s cap space.

Through 11 games, there’s no evidence that the unit can find consistency.

“I thought the effort was excellent. Those guys were pushing and fighting and doing their absolute best, but again, it’s the details that matter,” Saturday said of the offensive line. “Just going back and coaching those fine details, making sure we understand it and then execute it.”

The Colts defense has done its part. It’s been a steadying force amid a disappointing season.

Sure, Jalen Hurts had his way late in the game. But the Eagles, a top-three scoring team entering the game, were held to a season-low 17 points.

“Listen, hats off to (defensive coordinator) Gus (Bradley) and the whole defense,” Saturday said. “Those guys played lights out. To hold Philly to 17 points the way that they did, I mean that to me, is a winning performance by those guys.

“They played lights out. Did a really good job, had a great plan, they executed and to top it all off, we had three of the guys who were sick throughout the whole week who basically couldn’t practice. Not only did they overcome the illness, but the way they played man, I told Gus I thought they had a heck of a performance, they gave us plenty of opportunities to win.”

The defense doesn’t have true help. The offense has disappointed all season. Through quarterback changes, offensive-line tweaks and coaching adjustments, the offense finds a way to come back to the underperforming unit it’s been since September.

This is the reality Saturday faces.

The way the Colts’ season has gone, there’s no pretty storybook ending.