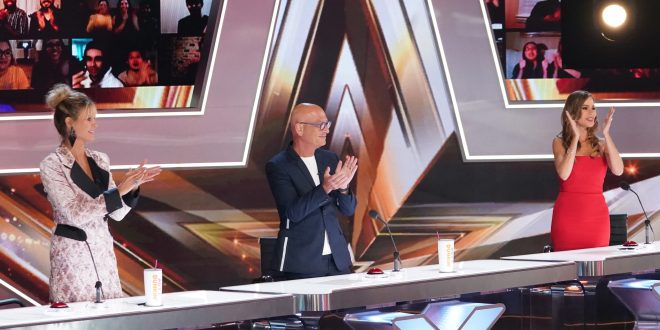 Simon Cowell may still be missing in action as he recovers from an electric bicycle accident, but Howie Mandel is living up to Cowell’s grouchy reputation on “America’s Got Talent.”

The competition is not getting any easier – only five of the 11 acts will advance – and neither are the critiques from Mandel, who slammed several acts for not stepping it up during the fourth and final round of quarterfinals Tuesday.

Mandel said Kenadi Dodds’ original song “Dancing Through The Stars” – which she wrote in honor of her younger sister Alexis, who suffers from an eye disease that gradually deteriorates her retina – “didn’t do it for me personally.”

“I think he’s being very negative today,” Sofía Vergara said. Mandel hit back at the newest judge: “I have been judging much longer than you.”

Last week on ‘AGT’: Heidi Klum ‘uncomfortable’ after comedian calls her a ‘tramp’ in cringeworthy skit

More: Simon Cowell breaks his back falling off electric bicycle

Cheerleading group C.A. Wildcats didn’t impress Mandel either. “The question I have for this particular performance is: Did you up it from last time?” the comedian asked.

“Maybe I’m on this shtick tonight about upping it, but this is the last episode before we go to the semifinals,” Mandel added, as the virtual audience booed him.

Klum argued that the group’s message of doing something kind for someone else during chaotic times “may be sad, but this is reality.” (Lightwave Theatre Company has faced pandemic hardships of their own and had to join “AGT” via satellite from Romania due to travel restrictions.)

But Vergara agreed with “negative Howie” this time around, admitting the group’s first performance during the auditions was “better.”

The harsh words didn’t stop there. Mandel compared singing duo Broken Roots’ performance of “I Still Haven’t Found What I’m Looking For” by U2 to “coffee house music.” He also gave the cold shoulder to vocal trio Resound, who performed a rendition of “Fall On Me” by Andrea and Matteo Bocelli: “Did you give us more? I don’t know.”

Mandel’s mean streak, however, was finally snapped by a couple of stellar performances.

“I love the whole production and apparently I love the reproduction, too,” Mandel joked. Klum added: “This has been my favorite act of the night.”

Mandel made the others scratch their heads when he gave a standing ovation to comedian Alex Hooper, who individually roasted each judge and referred to Mandel as “Mr. Clean.”

“My problem is not with (Hooper). My problem is with (Mandel),” Vergara said. “The whole night (Mandel’s) been so negative and suddenly (Hooper) comes and destroys us and he’s clapping?” (During his act, Hooper asked Vegara, “Who did your makeup? A drunk drag queen?”)

Mandel retorted, “This is what I’ve been looking for.”

Mandel was proud of his Golden Buzzer. Leake gave a “powerful” spoken word performance about his Black mother’s fear of him becoming “America’s next most popular hashtag” every time he leaves home amid protests against police brutality and racism.

“You took an older white guy and put myself into the body of an African American mother just hoping her son survives life,” Mandel said. “In my heart, you just won the whole night.”

Fans can vote up to 10 times for each act on NBC.com/AGTvote, the “America’s Got Talent” app and through Xfinity Voice Remote. The acts in the semifinals will be revealed during Wednesday’s results show (NBC, 8 EDT/PDT).