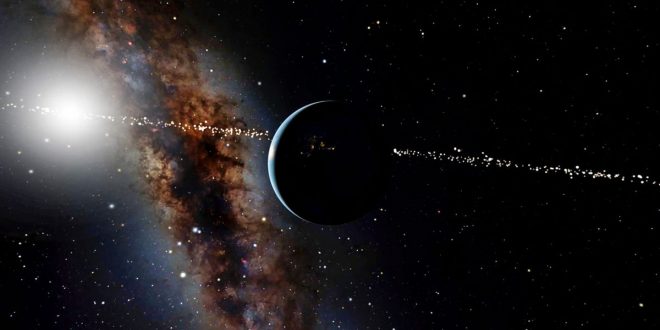 Aliens From 1,715 Stars Could’ve Seen Earth Over the Past 5,000 Years, Study Suggests

Astronomers on Earth have spotted thousands of exoplanets since the 1990s, so it’s not unreasonable to assume that aliens, should they exist, would be capable of the same feat. Working under this assumption, astronomers have identified a surprising number of nearby stars from which alien astronomers could’ve detected our planet since the advent of human civilization.

It has only been within the past 30 years that astronomers have finally been able to answer the age-old question about whether planets exist around other stars. To date, over 4,000 exoplanets have been confirmed by scientists, the vast majority of them (around 70%) spotted using the transit method. The technique works by measuring periodic decreases in a star’s luminosity—the result of a passing exoplanet. The bigger the dip in brightness, the bigger the planet. And by documenting repeat transits, astronomers can calculate the length of an exoplanet’s year.

The transit method is great, but it only works when our vantage point is just right, as exoplanets have to pass directly in front of their host star from our line of sight. By logical extension, alien astronomers should be able to use the transit method to spot Earth, but again, the direction of view is key.

The added element of time

In 2020, a team led by Lisa Kaltenegger, professor of astronomy at Cornell University, identified around 1,000 stars currently parked in the Earth Transit Zone (ETZ), that is, the sweet spot from which our planet can be seen transiting our Sun. Kaltenegger, along with study co-author Jackie Faherty, an astrophysicist at the American Museum of Natural History, have now updated this study by adding the element of time.

“The universe is dynamic and everything moves,” wrote Kaltenegger in an email. “Thus, the cosmic front seat to see Earth as a transiting planet, blocking light from the Sun, is fleeting. It can be gained and lost. We wanted to know how long stars keep that vantage point, and also which stars had it and which stars will get it.”

The duo chose a 10,000-year span: 5,000 years in the past, when early human civilizations first emerged, and the next 5,000 years, as “I am optimistic that we’ll figure out how to survive,” said Kaltenegger.

Stars with a view of Earth

Using data from the ESA’s Gaia Catalog of Nearby Stars (GCNS), the team identified 1,715 stars within around 300 light-years that were in the ETZ during the past 5,000 years and an additional 319 stars that will enter into this special zone within the next 5,000 years. Details of this analysis were published today in Nature.

“What is fascinating to me is the dynamic nature of our cosmos,” said Kaltenegger, director of the Carl Sagan institute at Cornell. “Any civilization with our level of technology could have seen us already on Ross 128b—but lost that vantage point about 900 years ago. Would anyone have concluded that there was intelligent life on Earth 900 years ago?”

Stars are not equal

Kaltenegger was not discouraged by finding so many red dwarfs (also known as M stars), saying we are sometimes “too narrowly focused on life as we are,” and humans “never had to develop for high-radiation environments, but we probably could have.”

I’m not so convinced. On Earth, extremophile organisms, such as bacteria and tardigrades, tend to be microscopic, and it seems unlikely that they’d ever be capable of evolving into full-fledged, tool-using intelligences. At least, that’s how I see it. Accordingly, the new analysis could be improved by a more nuanced approach to assessing a star system’s potential for habitability, aside from just identifying exoplanets within habitable zones.

A new tool for SETI

This concern aside, the paper could be put to good use in the search for extraterrestrial intelligence. It would be smart to search for potentially habitable exoplanets around stars that are capable of detecting us in turn. The transmission of handshake messages (via targeted radio waves or laser light, for example) would serve to confirm the presence of an extraterrestrial intelligence and kickstart the process of interstellar communication.

Now, the odds that two technological civilizations exist at roughly the same time and live reasonably close to each other must be exceedingly low, but it’s a possibility worth entertaining.

What’s more, we are on the cusp of being able to detect potential biosignatures in the atmospheres of nearby exoplanets, such as abnormal amounts of atmospheric carbon dioxide. The upcoming James Webb Space Telescope should be able to do this, and we should likewise assume that alien astronomers have this ability. For all we know, they’ve been watching us for years, and now it’s our turn to find them.