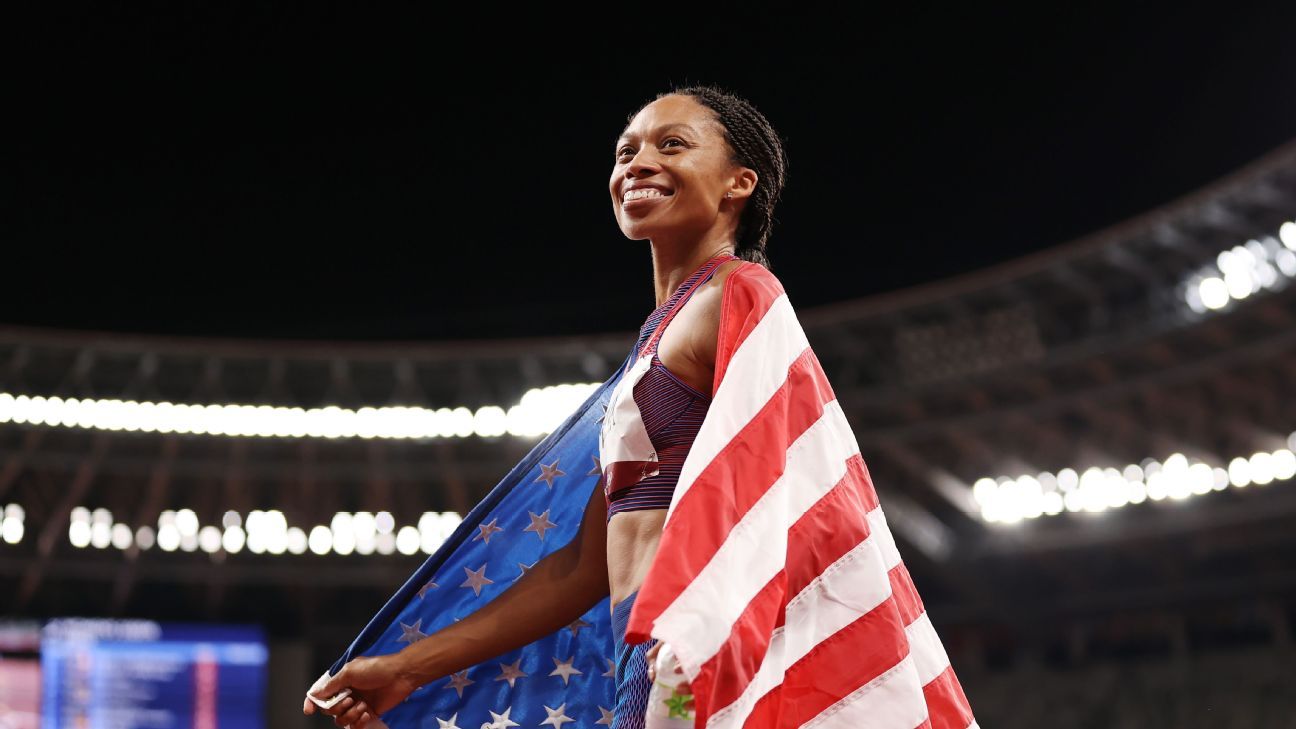 Allyson Felix’s grit, more than her speed, is what makes her a legend

Resilience. Determination. Humility. Grace. Excellence, yes, but not dominance, or flamboyance, or any of the other characteristics often associated with the world’s fastest humans. It was not eye-popping times that made Allyson Felix the most decorated woman in Olympic track history. It was what she did in her final individual Olympic race, chasing an athlete far younger than her.

That Felix even made the 400-meter finals Friday night in Tokyo is a monumental achievement. Felix is 35 years old, in her fifth Olympics, two years removed from pregnancy complications that could have killed her or her daughter, Camryn. She is 5-foot-6 and 126 pounds. Age had pushed her out of the 200, her signature event, up to the 400. Of the eight women who lined up in the starting blocks Friday, Felix had the seventh-slowest time of the preliminary rounds.

Felix started well in Lane 9 but was caught halfway through the race by Jodie Williams of Great Britain in Lane 8. Coming out of the second turn, Felix and Williams trailed Shaunae Miller-Uibo by a step. Miller-Uibo is 27 years old, with a chiseled 6-foot-1, 152-pound physique and strides that seem long enough to reach Tokyo from her native Bahamas. Five years ago, at the Rio Olympics, Miller-Uibo had to literally dive across the finish line to steal gold from Felix by seven-hundredths of a second. It was one of the cruelest losses ever for Felix, who has experienced more than her share of Olympic heartbreak.

There was no need to dive in Tokyo. Miller-Uibo opened a huge lead down the homestretch and demolished the rest of the field, winning gold in 48.36 seconds. Felix kept chugging in the outside lane, fighting to make history. She clung to third place, but with 50 meters to go was overtaken by Stephanie-Ann McPherson of Jamaica. It looked like Felix would succumb, would again be denied an individual accomplishment, would again have to seek solace in the relays.

One of the beautiful things about track is the race within the race. It’s the ultimate individual sport, with athletes competing as much against themselves as each other, defining victory and defeat by their own times and terms. Felix was not really running against Miller-Uibo in Tokyo — that day had passed. Felix’s career, and her purpose, is defined by something bigger than gold. In the last 20 meters of her last solo Olympic performance, Felix summoned a burst of speed and grabbed the bronze medal with a time of 49.46.

“I feel like I have come a long way from all the other Games. This one is just different,” Felix said afterward. “Sometimes it sounds like a cliché, but it honestly is more than just me running out there. I’m not too wrapped up in winning more medals. The biggest thing for me was coming back.

“Earlier today I looked through some of the videos again of things that we had taped when I was in hospital with Cammy, and on the comeback trail — those really, really hard moments — and that’s what I tried to tap into.

“Obviously I always run for gold, but I just wanted to have joy no matter what happened tonight.”

The bronze is Felix’s 10th Olympic medal, more than any woman track athlete ever, one more than Merlene Ottey of Jamaica. She is tied with Carl Lewis for the most medals by any runner, ever, and is likely to surpass him Saturday in the 400-meter relay. She helped set the current 4×100 world record of 40.82 seconds. At the world championships, Felix has 13 gold and 18 total medals, more than any athlete ever. She has won six Olympic golds, more than any woman runner ever.

Five of those Olympic golds are in the relays. Her personal best of 21.69 in the 200 is seventh all-time; none of her other individual marks are that close to the top. A sizable number of the women listed ahead of her were caught using performance-enhancing drugs; Felix is a charter member of the voluntary drug-testing coalition Project Believe. Her career overlapped with Jamaica’s taking over the sprinting world, and Felix ran valiantly against the likes of Veronica Campbell Brown, Shelly-Ann Fraser-Pryce, Elaine Thompson and Shericka Williams. For so many races, Felix lined up against women with more size and speed than she would ever have.

At one point in her career, the losses burned. Felix’s humble, God-centered demeanor hides a red-hot competitive core, and she has spoken publicly about the desire to trade multiple world championship titles for just one of those elusive Olympic golds. She often said she never wanted to be comfortable with losing.

In Tokyo, though, the equation changed. She ran for Camryn, who was born prematurely at just 3 pounds, 8 ounces. She ran to inspire women who sacrifice their careers and their bodies to become mothers. To show that Nike was wrong to cut her compensation 70% after her pregnancy, and that she was right to found her own brand, Saysh, whose shoes she wore Friday. To prove that at age 35, after preeclampsia and an emergency C-section that left her unable to walk, she could run an Olympic final within .25 seconds of her personal best.

“I’m not afraid of losing. I lose much more than I win,” Felix posted on Instagram hours before the race. “That’s life and I think that’s how it’s supposed to be. I’ve found that I learn more from my losses and that I have gained much more value in the journey toward a goal than achieving that goal. … I’m afraid of letting people down. Of letting myself down. I hold myself to such high standards and I’m realizing as I’m sitting here the night before my final individual Olympic final that in a lot of ways I’ve let my performances define my worth. … But right now I’ve decided to leave that fear behind. …

“I’m not sharing this note for me. I’m sharing it for any other athletes who are defining themselves by their medal count. I’m writing this for any woman who defines her worth based on whether or not she’s married or has kids. I’m writing it for anyone who thinks that the people you look up to on TV are any different than you. I get afraid just like you, but you are so much more than enough. So take off the weight of everyone else’s expectations of you. Know that there is freedom on the other side of your fear. Go out there and be brave with your life because you are worthy of your dreams.”

Seventeen years ago, when Felix made her Olympic debut at age 18, she dreamed of gold. Now she dreams of helping others, as she helped so many teammates win relays on the track. She dreams of eliminating racial disparities in maternal care, of making sure that women athletes are treated fairly.

Felix has more races to run. She should receive a majestic farewell at the 2022 world championships at Hayward Field in Oregon. And then we will remember her, not as the fastest, but as a woman defined more by how she fought than what she won.