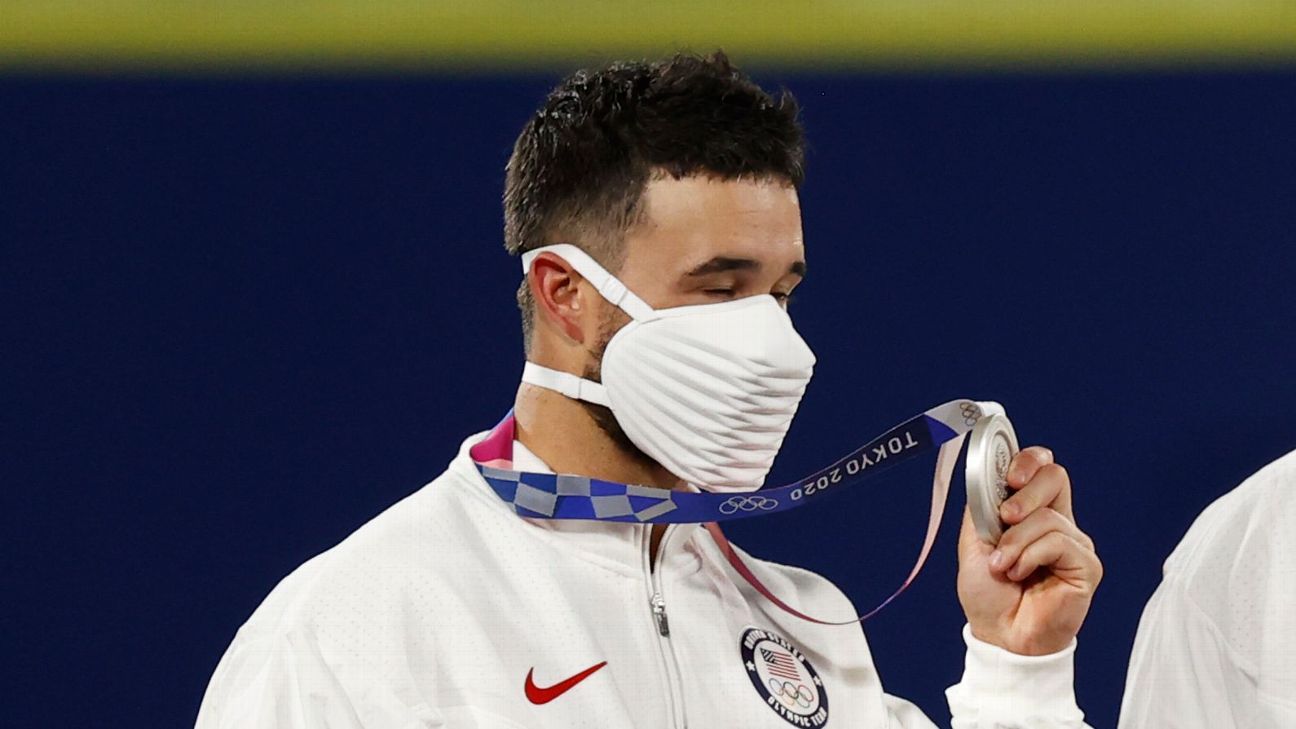 Alvarez is 6th to medal in Summer, Winter Games

YOKOHAMA, Japan — Eddy Alvarez had to be consoled — scolded, even — after his first silver medal.

“My coach had to bring us together and make us snap out of it,” Alvarez said. “He yelled at us. … He basically said, ‘You know, you’re silver medalists.’ And that’s when it kind of hit me.”

The speedskater-turned-second baseman needed no such pep talk for silver No. 2.

Alvarez and the U.S. baseball team accepted their Olympic silver medals after losing the championship game 2-0 against Japan on Saturday night, capping a remarkable run for the 31-year-old Miami Marlins minor leaguer.

A silver medalist in 2014 at Sochi as part of the U.S. four-man short track speedskating team, Alvarez turned to baseball later that year — a path that ultimately led him back to the Games and another silver medal.

“Feels like déjà vu,” Alvarez said. “It’s just as heavy as the other one. Same color, little different design, but it’s still an incredible journey, an incredible experience.”

The U.S. leadoff hitter was assured his second medal when the Americans beat South Korea in the semifinals Thursday, becoming just the third American and sixth Olympian with medals from the Winter and Summer Games.

“It’s hard to describe it, because it’s like bittersweet, but at the same time, it’s an unbelievable feeling,” Alvarez said.

“I had no idea this is where I was going to end up. Once I retired from skating, never in my wildest dreams would I ever think I would have the chance to come back to the Olympics.”

Alvarez spent seven seasons in the minor leagues before finally get a look at the majors. He debuted on Aug. 5, 2020, after a COVID-19 outbreak ravaged the Marlins’ roster, and hit .189 in 12 games.

The otherwise anonymous Triple-A infielder has been a marquee name at these Olympics. He carried the American flag along with basketball player Sue Bird at the opening ceremony, and he says other athletes have approached him in the village, calling him “the flag-bearer guy.”

He backed up the hype once the games began. He entered the gold medal game hitting .350 with three RBIs, then had one of the Americans’ six hits in the final, a night they couldn’t solve a quintet of pros from Japan’s Nippon Professional Baseball.

Alvarez was the first U.S. player to receive his medal — teammate Eric Filia draped it around his neck. He lingered on the field after as Team Japan soaked in its moment.

“A little nostalgia,” Alvarez said. “I know that feeling a little bit. I know watching someone celebrate a victory of that magnitude is never a good feeling, because you know you’ve got to listen to someone else’s anthem.

“It’s a tough pill to swallow when you’re so close to winning and you fall short. But at the same time it’s one of those things that I know will hit me eventually, of how incredible and blessed I am to be a part of this.”