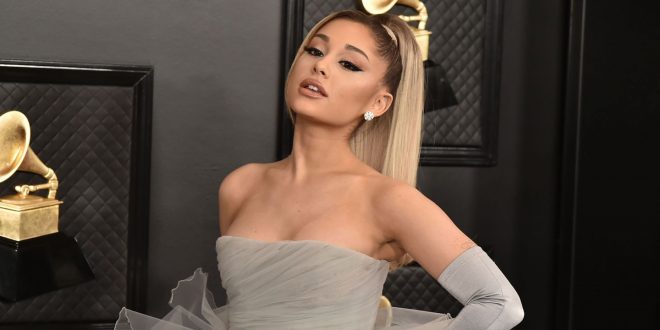 A few weekends ago, on May 15, 2021, Ariana Grande got married. In a private ceremony at her home in Montecito, California, Grande tied the knot with her partner, Dalton Gomez, wearing a dress described by Vogue as “a custom lily-white silk charmeuse empire waist column gown accented with a sculpted neckline, an exposed bra strap closure, and a plunging back.”

It was a highly private affair for one of the most famous people on the planet, and details from the event were scarce in the days immediately following it. But today (May 26), Grande has let fans into her world by sharing a few photos from her big day. The first burst finds her and Gomez kissing in front of a fireplace surrounded by dangling floral arrangements and offers some details of their classic black-tie vibe, including a great shot of her dog Toulouse in the foreground. The second batch zooms in on Grande’s dress, showing multiple angles as well as some detail shots of her getting her makeup done.

Vogue notes that she wore one of her earrings upside down — courtesy of designer Lorraine Schwartz — in a nod to her Sweetener era. The duo reportedly kept things very small, with fewer than 20 family and close friends in attendance.

Her last photo was simple: just a smooch with her new husband, accompanied by a photo caption of their anniversary date, “5.15.21 🤍.”

Grande’s dress was apparently inspired by Audrey Hepburn’s look as Jo Stockton in 1957 musical rom-com Funny Face. Both her parents, Joan Grande and Ed Butera, walked her down the aisle.

Grande and Gomez first paired up in January 2020 and got engaged by the end of the year. Their life together, while largely private, was put on display a bit in Grande’s joint song/video with Justin Bieber, “Stuck With U,” that dropped in May 2020. The part where they cuddle with their heads just out of frame remains cute. They’re married now!

Vogue has loads more photos, all shot by Stefan Kohli, to parse through — check them out here. See Ari’s posts above.