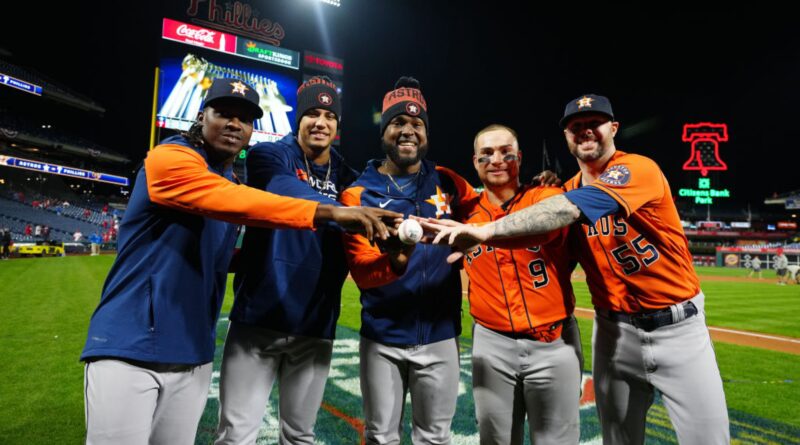 Baseball history was made Thursday night in Philadelphia.

Houston Astros right-hander Cristian Javier and three relievers combined for only the second no-hitter in World Series history and just the third no-no in an MLB postseason game.

See the final out as four Houston pitchers combine for only the second no-hitter in World Series history.

The dominant pitching performance silenced Philadelphia’s red-hot bats, as Houston cruised to a 5-0 victory and evened the series at 2-2. A pivotal Game 5 is set for Thursday night (8:03 p.m. ET on FOX and the FOX Sports App).

The man of the moment

Javier struck out nine and walked just two in six innings of work before giving way to Bryan Abreu, Rafael Montero and Ryan Pressly, who each threw a hitless inning.

A perspective on history

Dusty Baker on managing a no-hitter

Dusty Baker talks with Tom Verducci about how he managed his pitching staff throughout only the third no-hitter in MLB postseason history.

Javier has now allowed just one run in his last 35 2/3 innings dating back to Sept. 14 (0.25 ERA). Houston has won eight straight games with the 25-year-old starter on the mound.

The only other no-hitter in the World Series was Don Larsen’s perfect game for the Yankees against the Brooklyn Dodgers in 1956.

Ryan Pressly on closing it out

Javier was pulled after throwing 97 pitches (63 for strikes) in his six hitless innings.

Jeremy Peña gives his POV on the historic night

Astros shortstop Jeremy Peña describes what the combined no-hitter was like from his point of view.

The combined no-hitter was the 19th in major-league history. One of those was by the Astros and Javier earlier this season, coming June 25 at Yankee Stadium.

Christian Vazquez on catching the no-hitter

Astros catcher Christian Vazquez talks about catching the first no-hitter of his career.

Astros third baseman Alex Bregman talks with the “MLB on FOX” crew about the final out of the game.

The Astros have thrown four combined no-hitters in their history (an MLB franchise record). The Phillies have been no-hit 21 times, the most in MLB history.

Philadelphia came in to Wednesday’s game with a perfect 6-0 record at home in the 2022 playoffs and coming off a five-homer barrage in a 7-0 victory in Game 3. But Houston’s pitchers silenced the raucous Philly crowd and cooled the Phillies’ hot lineup.

Houston’s Yuli Gurriel reacts after catching the final out of the combined no-hitter. (Photo by Brian Garfinkel/MLB Photos via Getty Images)

The Astros celebrate making history and squaring the World Series at 2-2, with Game 5 on Thursday night. (Photo by Brian Garfinkel/MLB Photos via Getty Images)

Ryan Pressly, left, is congratulated by Héctor Neris after closing out the game. (Photo by Daniel Shirey/MLB Photos via Getty Images)