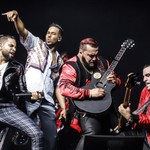 Even though the odds were against them, the bachata group took the stage at 9:55 p.m., opening the set with five back-to-back classics: “El Desprecio,” “La Niña Cambio,” “Por Un Segundo,” “La Boda,” and “Infieles.”

“Good evening,” lead singer Romeo Santos told the crowd in Spanish. “We decided to kick off the tour in Miami for many reasons, and you know what? F— the storm!”

Matching in all-black outfits, the group continued to croon fans with hit tracks such as “Dile Al Amor,” “Enseñame a Olvidar” and “El Malo,” which follows Romeo’s philosophy that even though one can date 50 people, only the “bad guy” conquers their heart.

The Hard Rock Stadium was packed Saturday night — 50,000 attendees to be exact. Amid the COVID-19 and delta variant spikes, the show was sold out. The venue staffers all had their masks on as they greeted fans but no COVID-19 measurements were in place for concert-goers, some of whom opted to wear their masks as they walked around the stadium or sat at their seats.

In fact, the group did not make any mention of the pandemic but instead sent an important message of “more love and less violence” when performing “Mi Corazoncito.”

Towards the middle of the concert, and under the on-and-off showers of the tropical storm, Aventura had a change of clothes and performed ballad versions of their songs “La Tormenta,” “Our Song,” “Deja Vu” and “Llorar” on of a “rooftop” setting. They also proceeded to receive fan petitions and sang a couple of impromptu songs before closing off their slow-tempo set with “Lagrimas.”

“When we started our careers, we weren’t fans of covering other artists’ music,” Romeo told the crowd. “ But with lots of respect, and may God have him in his glory, we wanted to pay tribute to the ‘Prince of Songs’ José José.”

Next, they dropped their reggaeton-infused “Noche de Sexo” and took it way back to some of their first jams released in the late 1990s and early 2000s, such as “La Novelita,” “Hermanita” and “Amor de Madre.”

“This tour is very special,” Romeo said as the band prepared for the grand finale. “We are celebrating more than two decades of trajectory. First because of God, and second because of you. Thank you!”

Aventura then performed “Obsesion,” the breakthrough song that put their modernized bachata sound on the global map, and bid farewell with fireworks, an explosion of confetti, and large balloons.

Or so fans thought.

Aventura closed the show with their first-ever performance of “Volví,” their new single alongside Bad Bunny.

“Benito never fails and neither does Aventura!” Romeo said as Bad Bunny came on stage and surprised the audience wearing a blue and white checkered-print outfit.

Aventura and Bad Bunny hyped up the crowd with their edgy urban-bachata collaboration as Bad Bunny flaunted his fast-paced bachata moves for the epic closing a little bit before midnight. “Volví” debuted at No. 1 on Billboard’s Latin Streaming and Latin Digital chats. It’s also No. 2 on Hot Latin Songs.

The Inmortal tour grossed $25.8 million and sold 189,000 tickets, according to figures reported to Billboard Boxscore. That’s 15 shows between Feb. 5 and March 10, 2020. Up next, Aventura will visit fans in Texas, Illinois, California, and New Jersey.