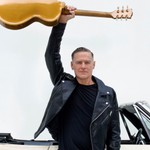 His biggest hit came courtesy of the early nineties power ballad “(Everything I Do) I Do It for You,” which topped the Hot 100 for seven weeks and went on to become not only Billboard’s No. 1 song of the summer of 1991, but the top title of the entire year.

Other Hot 100 toppers included 1985’s “Heaven,” 1994’s “All for Love” (featuring Rod Stewart and Sting) and 1995’s “Have You Ever Really Loved a Woman?”, the latter off his stylish 18 Till I Die album. Over the course of his A&M years he posted several other FM radio staples like “Run to You,” “One Night Love Affair” and “Can’t Stop This Thing We Started.”

It was during this period that Adams got involved in humanitarian work and became a regular at high profile benefit concerts, including Farm Aid and, of course, Live Aid.

After A&M merged with Geffen and Interscope to form Interscope Geffen A&M Records in 1999, Adams began recording for Polydor Records, also part of the Universal Music Group family. His releases with Polydor have included 2004’s Room Service and 2015’s Jeff Lynne-produced Get Up, which includes the standout track “You Belong to Me.”