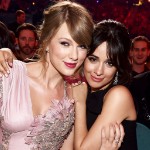 The two have taken the stage together multiple times, including their performance of “Shake It Off” at the 2019 American Music Awards alongside Halsey. Cabello also opened for Swift during her 2018 Reputation Stadium Tour, performing “Shake It Off” every night with fellow opening act Charli XCX stepping in to complete the trifecta. Cabello thanked the Folklore star for letting her join her at the AMAs when Swift received the Artist of the Decade honor, saying, “You have always been my biggest inspiration on my own journey in music as a writer and artist,” and telling Billboard that touring with her “was a really full-circle moment.” Three years before, Cabello was just another Swiftie in the crowd during the 1989 World Tour, referring to the pop superstar as her “musical queen.”

“She is so brave at watering those seeds of friendships and relationships,” Cabello told Bustle. “She always answers my texts and she’s so busy. I don’t even answer texts because I’m just worse at it. It takes intention to be like, ‘Let me write all my friends back.'”

In a 2018 interview, Cabello revealed how the two became friends in the first place. While the Romance singer was going through her first heartbreak, their mutual friend and fellow artist Hailee Steinfeld introduced her to Swift, who later sent Cabello a breakup playlist and said, “Come over. Let’s talk about it” and invited her to a “girls-night thing” with HAIM.