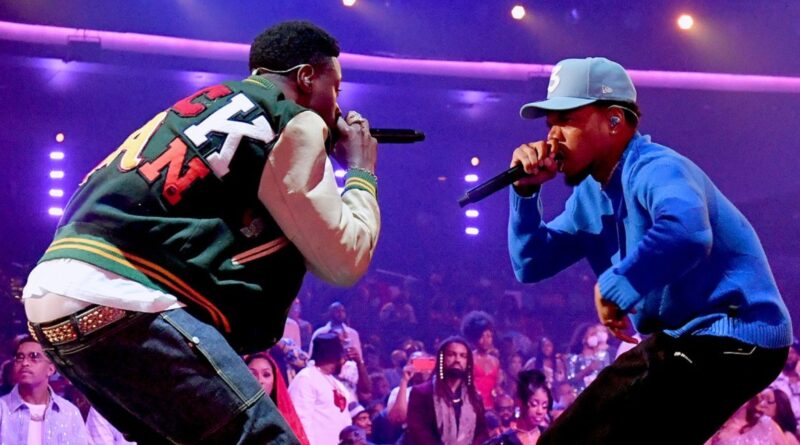 “The Highs & The Lows” is from Chance’s upcoming 2022 album ‘Star Line Gallery.’

Joey Bada$$ and Chance the Rapper perform onstage during the 2022 BET Awards at Microsoft Theater on June 26, 2022 in Los Angeles.
Aaron J. Thornton/GI for BET

In front of a backdrop of two framed paintings of cloudy pink skies, Chance the Rapper returned to the BET Awards stage on Sunday night (June 26) to perform “The Highs & The Lows” alongside Joey Bada$$.

The Chicago rapper has always put a focus on his uplifting lyrics, so it made sense that throughout his performance, the words of his latest single — released just this month — were displayed in lower-case font across the screen. Chance and Joey both made their way from the main stage to the circular stage in the middle of the crowd for the finale, with the same pink-tinged cloudy skies projected onto the platform.

“The Highs & The Lows” is from Chance’s upcoming 2022 album Star Line Gallery, which will be his first album since 2019’s The Big Day. Joey Bada$$ also has a new album on the way, titled 2000. His third studio album was originally set to be released earlier this month but has been delayed due to sample clearances, Joey shared on Twitter.

Chance previously hit the BET Awards stage back in 2017 to close the show alongside DJ Khaled, Lil Wayne and Quavo with “I’m the One,” while this marked Joey Bada$$’s first BET Awards performance.

Watch the performance below:

.@chancetherapper and @joeybadass just gave us an unforgettable performance of The Highs & The Lows at the #BETAwards! 🙌🏾 #CulturesBiggestNight #BET pic.twitter.com/6GsaQBQapa