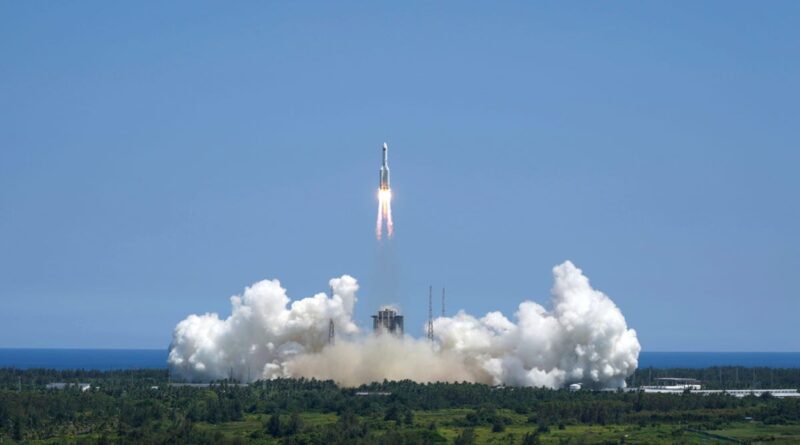 A 21-metric-ton core stage is poised to perform an uncontrolled re-entry into Earth’s atmosphere at 10:21 p.m. ET on November 4, give or take around 16 hours. Sadly, this marks the fourth time that a remnant from China’s Long March 5B rocket has threatened human lives and property.

We will be updating this page as new information arises, so be sure to check back for regular updates.

Update: November 2, 5:05 p.m. ET: And we’re back to Friday, at least for people living in the Eastern Time Zone and those to the west. The newest projection has the reentry at 9:55 p.m. ET on Friday, November 4 (1:55 a.m. UTC). The error bar has shrunk yet again, and is now at plus-minus 11 hours. When looking at the Aerospace Corporation debris footprint map, keep in mind that the blue and yellow lines represent the possible reentry paths, while the spaces (or gaps) between the lines represent places not at risk.

Update: November 2, 4:08 p.m. ET: The error bar keeps shrinking, as expected. An Aerospace Corporation update tweeted out at 12:47 p.m. ET offers a prediction of 1:10 a.m. ET on Saturday, November 5 (5:10 a.m. UTC), with the margin of error set at 13 hours. The core stage is constrained to a northernmost latitude of 41.5 degrees and a southernmost latitude of -41.5 degrees. Approximately 80% of the world’s population resides within this zone.

Sleepy and ethical.
The Canadian Down & Feather Company can check a few people off your holiday shopping list: cozy connoisseurs or family who just needs better sleep.

Update: November 2, 10:02 a.m. ET: The latest estimate from The Aerospace Corporation shifts the time up a few hours, moving the prediction from late Friday to early Saturday for those in the Eastern Time Zone. The core stage is now expected to perform its re-entry at 12:51 a.m. ET on November 5 (4:51 a.m. UTC), with an error bar of 14 hours.

The Long March 5B blasted off from Wenchang Space Launch Center in Hainan on Monday, October 31, delivering the third and final module, called Mengtian, to China’s Tiangong space station. Most rocket stages are brought down with reignited engines, allowing them to be steered away from populated areas, but not the Long March 5B. Very irresponsibly, China’s space agency hasn’t taken this precaution with its heavy-lift launch vehicle, leaving it largely up to chance as to where it might land.

So now we’re forced to guess as to where the core stage might fall. As on previous occasions, the Aerospace Corporation’s Center for Orbital Reentry and Debris Studies (CORDS) is tracking the object and providing regular updates. The company’s initial prediction suggests the uncontrolled re-entry will happen at 10:21 p.m. ET on Friday, November 4 (Saturday, November 5 at 2:21 a.m. UTC). The Aerospace Corporation devises its estimates by analyzing data from the U.S. Space Force’s Space Surveillance Network.

It’s still too early to know where the debris will land. The possible area in which the core stage might fall, known as the “debris footprint,” will become constrained over time, but if the prior episodes were of any indication, we won’t really know until the minutes prior to re-entry. Objects coming in from space travel at speeds reaching 17,500 miles per hour (28,164 kilometers per hour), which means a one-hour error in the re-entry time translates to a 17,500-mile (28,164 km) error in the predicted crash location.

This will mark the fourth time that a Long March 5B core stage will crash in an uncontrolled manner. On the previous three occasions, debris fell onto an inhabited area along the west coast of Africa; into the Indian Ocean near the Maldives; and in northern Borneo. Mercifully, no one has been injured or killed, but scientists have raised concerns that this could eventually happen.