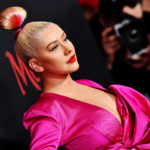 Christina Aguilera Is ‘Excited & Inspired’ to Be Back in the Studio

The Grammy-winning pop superstar hasn’t released an album since 2018’s Liberation, which debuted at No. 6 on the Billboard 200. The last time the Fighters heard new music from their hero was almost exactly a year ago on March 6, 2020, when she released the single “Loyal Brave True” for the Disney live-action remake of Mulan.

Then 22 years after the release of her stirring classic “Reflection” from Disney’s 1998 Mulan soundtrack, she breathed new life into the song, which she tweeted in September “represents exciting and new chapters & energy for me,” and dropped an equally stunning music video.

The Fighters will have to keep waiting and see what exciting and new chapter Aguilera will be ushering in following her latest studio sessions.

See her updates straight from the studio below.