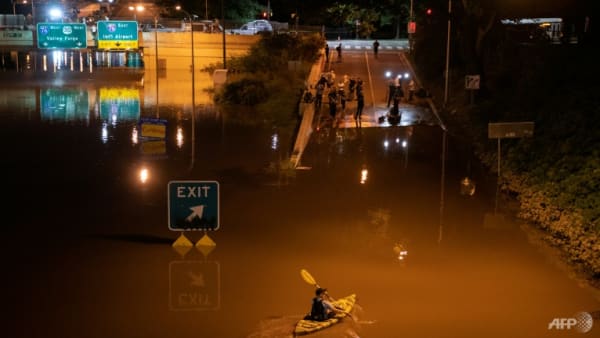 Climate change blamed for havoc in northeast US floods

NEW YORK: Climate change and creaky infrastructure were blamed Friday (Sep 3) for the scale of the impact from floods tearing through New York City when remnants of Hurricane Ida swept across the US northeast, killing at least 47 people.

“We are in a whole different world,” New York Mayor Bill de Blasio said after the flash floods. “This is a different challenge.”

The extreme weather, combined with a lack of preparation, stretched the United States’ biggest city to breaking point.

“It’s no big surprise that the city seems to break down every time there’s a big storm,” said Jonathan Bowles, executive director of the think-tank Center for an Urban Future.

“The city’s infrastructure hasn’t kept pace with the population growth that New York’s had in the last couple of decades, let alone the increasing ferocity of storms, and rising sea levels that have come with climate change,” Bowles said.

While there has been a lot of investment in big projects – train stations, airports, new bridges – less funding has gone to “unsexy” projects such as sewer lines and water mains, he said.

Nicole Gelinas, an urban economics expert at the Manhattan Institute, another think-tank, said New York’s infrastructure “was not built for seven inches of rainfall in a few hours.”

Drains for the city’s sewer system get clogged, Gelinas said, and “there’s not enough green space to catch some of the water before it runs into the drains.

“So some of these avenues, they become canals when there’s a big storm.”

New York, New Jersey and Pennsylvania were the hardest hit by Ida, which ravaged the southern state of Louisiana and the Gulf Coast earlier in the week before sweeping northeast.

President Joe Biden, who has made threats from climate change a priority, flew to Louisiana, where more than 800,000 people remained without power after Ida made landfall as a Category 4 storm.

He said costly improvements to the levee system around New Orleans after the far deadlier Hurricane Katrina in 2005 had proved their worth in preventing more catastrophic damage this time.

Similarly transformative infrastructure projects – rather than simply rebuilding – will have to become the new norm, he said, pushing for passage of his giant US$3.5 trillion infrastructure bill in Congress.

“Things have changed so drastically in terms of the environment, you’ve already crossed a certain threshold,” he said.

“You can’t build back a road, a highway or a bridge to what it was before.”

New Jersey Governor Phil Murphy said Storm Ida had left 25 people dead in his state, most of them “individuals who got caught in their vehicles.”

Thirteen deaths were reported in New York City, including 11 victims who could not escape their basements, police said.

Three people were killed in the New York suburb of Westchester, while another five died in Pennsylvania and one – a state trooper – in Connecticut, officials said.

“I’m 50 years old and I’ve never seen that much rain ever,” said Metodija Mihajlov, whose Manhattan restaurant basement was flooded with three inches of water.

“It was like living in the jungle, like tropical rain. Unbelievable. Everything is so strange this year,” Mihajlov told AFP.

The US Open tennis tournament was halted as howling wind and rain blew under the corners of the Louis Armstrong Stadium roof.

It is rare for such storms to strike America’s northeastern seaboard and comes as the surface layer of oceans warms due to climate change.