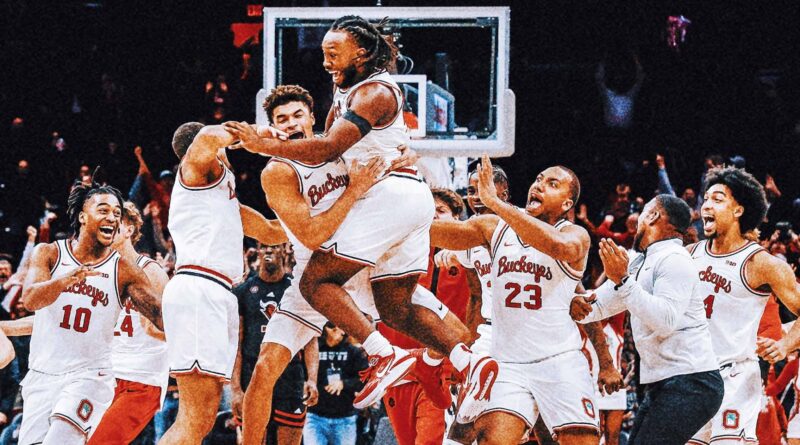 Well, that was a wild week of college basketball.

Let’s start with “The Call” on Thursday night.

Ohio State beat Rutgers on a 3-pointer by Tanner Holden at the buzzer. The problem though, was that Holden stepped out of bounds, came back in bounds, caught a pass from Bruce Thornton and hit a 3-pointer at the buzzer for a 67-66 win.

The Big Ten issued a statement saying that the call was wrong. The basket should not have counted due to NCAA Rule 9, Section 3, Article 1, which states that a player who goes out of bounds of his own volition can’t be the first one to touch the ball when he re-enters the court.

But the play wouldn’t have mattered if Rutgers’ Caleb McConnell had hit the second of his two free throws, or maybe if Paul Mulcahy had closed out quicker on Holden. That’s on Rutgers.

The officials may have missed Thornton stepping out of bounds. And they certainly didn’t see Holden go out of bounds and come back into the play in a split second.

Should they have caught Holden stepping in? Maybe. But it happened so quickly, and the officials aren’t focused on that sideline play. One high-level official told me Sunday that the rule was put in place for players who would be stepping in from the baseline, not the sideline.

What should happen is a review. I’ve talked to a number of coaches who would like to see every end-of-game basket reviewed. The games are too important to not get it right. Yes, there is human error, and some plays are happening way too fast for the human eye. I get it. But game-winning buckets should be reviewable. This one wasn’t. If the question was whether the shot was a 2-pointer or 3-pointer, or whether the shot was released in time, then it is reviewable. But whether a player came from out of bounds is not. The officials were correct to leave the court without checking the monitor, despite Rutgers wanting to see the play again.

But if there is a change to come from this event, then it should be ensuring that game-winning baskets — no matter how they come about — must be checked. This has to be addressed in the offseason.

Alabama: The Tide won at Houston and have now beaten two No. 1 teams this season — Houston and North Carolina. Love the way Nate Oats gets his team to play with purpose and passion every possession. This was a comeback win at Houston and proved the Tide are in the chase for the SEC title.

Illinois: Wow, what a chaotic week for the Illini. They came back to beat Texas in OT in the Jimmy V Classic in New York, only to then completely fall flat at home against Penn State. Brad Underwood had an epic rant postgame Saturday — even making a fart noise to describe the leadership of Terrence Shannon Jr. Yes, I had to type that. Look, Underwood is a tremendous coach and motivator. My only concern/comment on ripping your team in this new era is that transfers won’t have any equity and loyalty built-in with a school and coach a few months from now. This sort of thing can backfire. Let’s see how the Illini respond.

Iowa: The Hawkeyes had to play without their best player Kris Murray against rival Iowa State and Wisconsin. They nearly won them both. The Hawkeyes beat the Cyclones and lost to the Badgers in OT. That’s pretty good for an Iowa team that is still finding its rotation.

Memphis: SMU transfer Kendric Davis scored 27 points in a win over Auburn to send a strong signal that Memphis isn’t going anywhere in the AAC. Memphis needed a big-time transfer and got one in Davis.

UConn: The Huskies are in position to be a No. 1 seed. That’s saying something under Dan Hurley, who has made it clear that he was going to build a national contender. Kevin Ollie won a national title in 2014. But Hurley is the closest coach to Jim Calhoun that UConn has seen. Hurley has the intensity that the Huskies faithful has grown accustomed to for decades. He still hasn’t won an NCAA Tournament game, but I would be shocked if they don’t go deep this season — especially as a high seed.

Is UConn the best team in college basketball?

Mark Titus and Tate Frazier discuss UConn’s impressive win over Florida and whether the Huskies should be ranked No. 1 in the nation.

Creighton: The Bluejays have completely slid with four straight losses, culminating with a neutral-site loss to BYU. Creighton needs to get healthy (Ryan Kalkbrenner was absent). The Jays still have the potential to be a top-three team in the Big East, but the preseason conference favorites are probably behind UConn, Xavier, Marquette, and maybe even St. John’s right now in the pecking order.

Arizona: The Wildcats’ loss to Utah clearly was an anomaly. They were something to behold in beating Indiana in Las Vegas behind the spirited Kerr Kriisa, bigs Azuolas Tubelis and Oumar Ballo, and big guards Pelle Larsson and Courtney Ramey. This team keeps coming at you.

The A-10: Fordham (11-1) is the best team in the A-10. And there’s no way the Rams are an at-large team at this juncture. The A-10 is a one-bid league in mid-December. There is still time to change that narrative, but the opportunities are fading.

Louisville and Cal: The Cardinals are 0-9. The Bears are 0-11. Not much can be said here. This just shouldn’t happen, especially when they have both had buy games on the home slate.

The SWAC: Grambling State beat Vanderbilt. That means the SWAC has four wins against Power 5 schools.

The Mountain West: Three teams in this conference are undefeated, and none of them are named San Diego State. UNLV (10-0), New Mexico (9-0) and Utah State (8-0) are a combined 27-0, and could all be on pace to join the Aztecs with NCAA bids.

KJ Williams: The Murray State transfer has been a major hit for LSU, including a 35-point outing in a win over Wake Forest. Keep tabs on his progress.

Antoine Davis: The Detroit starting guard passed the 3,000-point mark. He did it on his 10th 3-pointer of the game in an OT loss to Charlotte. Davis is the 11th player in NCAA history in Division I to score 3000-plus points.

Syracuse–Georgetown: The game was on ABC, but I can’t remember a time when this game lacked any kind of buzz. Crazy times.

Andy Katz is a longtime college basketball writer, analyst and host. He can be seen on FOX Sports and Big Ten Network platforms, as well as March Madness and NCAA.com, and he hosts the podcast “March Madness 365.” Katz worked at ESPN for nearly two decades and, prior to that, in newspapers for nine years.

Get more from College Basketball Follow your favorites to get information about games, news and more