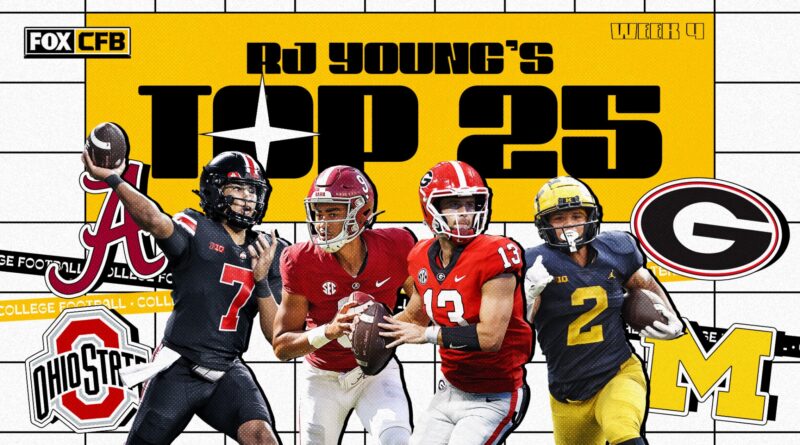 When Michigan needed a yard on fourth down in a close ballgame against an undefeated Big Ten opponent, Jim Harbaugh didn’t hesitate.

He called a run play for the man who has become not just the Wolverines’ talisman, but the reason they’ve gone from unranked to No. 4 in my top 25: Blake Corum.

And Corum rushed for a TD.

The Wolverines walked into the Big House thin at tailback with Donovan Edwards out due to injury and didn’t have anyone else the coaching staff felt confident in taking the ball.

With an Iowa squad playing its best defense in more than 65 years looming next Saturday (Noon ET on FOX and the FOX Sports app), the Wolverines will need Corum to continue to be heroic if they expect to remain in the final CFP spot.

After a ripe feting of the UGA — led by yours truly — the Dawgs played their worst football of the season against the Golden Flashes.

The Dawgs are STILL the No. 1 team in the country — for now.

Wisconsin had never given up more than 41 points in a game with Jim Leonhard as its defensive coordinator — he’s had that job for six years.

The Buckeyes scored 45 before the third quarter ended while quarterback C.J. Stroud completed 17 of 27 for 281 yards and five TDs. Two Ohio State tailbacks — TreVeyon Henderson and Miyan Williams — each rushed for more than 100 yards.

Running back Corum put the Wolverines on his back with 30 rushes for 243 yards and two TDs in Michigan’s first win against a Power 5 team this season.

The No. 4 Michigan Wolverines outlasted the Maryland Terrapins in a tightly-contested Big Ten matchup, thanks in large part to Blake Corum.

The Tigers survived an outstanding offensive showing from the Demon Deacons in which Sam Hartman, ranked No. 767 in the 247 Sports Composite 2018 class, nearly matched Clemson quarterback DJ Uiagalelei blow-for-blow.

Both QBs finished with more than 330 passing yards and at least five passing TDs in this thriller.

UK quarterback Will Levis has passed for at least 300 yards in three of the Wildcats’ four games this season. He threw for 300 yards just three times in all of 2021.

Hendon Hooker has been so good that Tennessee might be thinking it can knock off Alabama on Oct. 15.

Against UF, Hooker threw for 349 yards and rushed for 112 more. He still hasn’t thrown an interception since Nov. 13, 2021, when he threw just one against Georgia.

Is Hendon Hooker a Heisman contender?

RJ Young breaks down why Tennessee QB Hendon Hooker could be having a Heisman-caliber season.

Minnesota outgained Michigan State 312-45 in the first half, recorded 19 first downs to Michigan State’s three, and allowed the Spartans to run just 19 plays.

Meanwhile, Mohamed Ibrahim continued to make a case as the best back in the country by becoming the first player to rush for 100 yards against Michigan State in 16 games.

This is his 13th consecutive 100-yard rushing performance.

It wasn’t a thing of beauty, but Heisman candidate Caleb Williams made the big plays when most needed as the Trojans pulled out a win in the difficult setting that is Corvallis.

The Sooners gave up more than 500 yards and 41 points in a humbling loss after an outstanding performance against the nonconference portion of their schedule.

After falling behind 14-0 in the first quarter, the Nittany Lions scored 33 unanswered points to defeat CMU. That’s the good news.

The bad news is that’s the last cupcake on PSU’s schedule.

This game had more twists and turns than a piece of origami. The two teams tallied more than 1,000 yards of total offense — 628 of which came from UO — and an identical number of first downs (28) in the best Pac-12 game of the season thus far.

Jaren Hall passed for 337 yards and four TDs to lead the Cougars.

The Bears put together an impressive showing against a formerly undefeated Iowa State on the road. The Bears led 31-14 at the start of the fourth quarter.

The Utes have won three straight since losing at Florida in Week 1, and they’ve looked impressive in each.

Wolfpack quarterback Devin Leary made light work of the Huskies, completing 32 of 44 passes for 320 pass yards, four TDs and an INT in the win.

A&M running back Devon Achane rushed for 159 yards on 19 rushes in a game the Aggies needed a missed field goal from Arkansas late to clinch the win.

The Red Raiders notched their first win against Texas in Lubbock since 2008 in front of a sold-out crowd at Jones AT&T Stadium.

RJ Young breaks down Kansas’ impressive victory against Duke and explains why the Jayhawks should be in the AP Top 25.

Adrian Martinez played the best game of his career. He passed for more than 200 and rushed for over 100 and four touchdowns in K-State’s upset of the Sooners.

The Hawkeyes scored two defensive TDs in their win against a previously undefeated Rutgers in Piscataway. Iowa’s defense has allowed just 23 points in its first four games — its fewest points allowed in the last 66 years.

– Heisman watch: Bryce Young reminds us why he won it

– Michigan has weaknesses, but a true star to lead the way

– CFP, Heisman and other predictions from FOX Sports staff

– Pac-12 is back in the spotlight, for all the right reasons