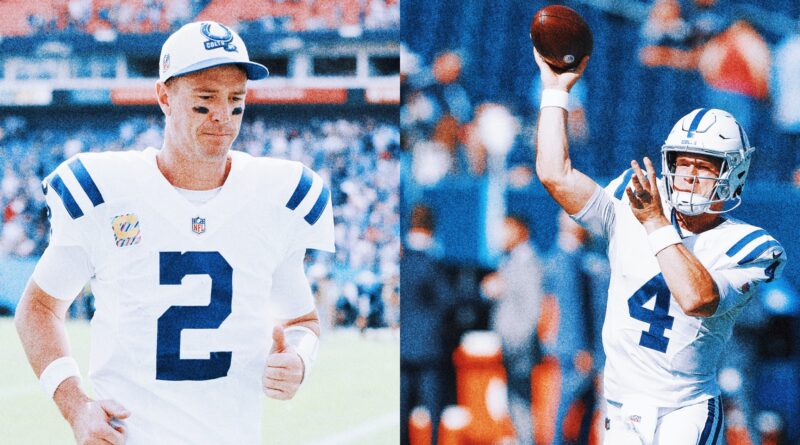 Ehlinger will start the Colts’ Week 8 home game against the Washington Commanders (4:25 p.m. ET on FOX and the FOX Sports App), the team announced Monday. Veteran Matt Ryan, who started the Colts’ first seven games of the 2022 season, is out with a shoulder sprain.

Injury is not the sole reason for the quarterback switch, however. Colts coach Frank Reich said Ehlinger will be the team’s QB1 for the remainder of this season.

“I’ve been particularly impressed with Sam in practice since the season started, the look that he’s given on the scout team, the quality of his throws, the way he’s commanding himself out there,” Reich told reporters Monday. “Just the total package. I just think it’s the best decision for our team moving forward.”

It was only a few months ago that the Colts brass was convinced acquiring Ryan was their best route to winning a title. The 2016 NFL MVP was brought in to stabilize the QB position after Carson Wentz struggled as the starter last year and was promptly traded at the onset of free agency. The Colts struck a deal with the Falcons for Ryan less than a week later.

But through seven games with Indy, the 37-year-old Ryan has arguably been a downgrade from Wentz, throwing just nine touchdowns with nine interceptions. (Wentz threw seven INTs all of last season.) This past Sunday, the Colts managed to score just 10 points as Ryan was picked off twice in a loss to AFC South rival Tennesse that dropped the club to 3-3-1 on the season.

Reich was blunt about the realities of the quarterback change when speaking to the media Monday.

“Extremely difficult decision given the respect and admiration that we have for Matt Ryan, given what he’s brought here,” Reich told reporters Monday. “He is a pro’s pro. This guy is special. We all know at the quarterback position that our poor production on offense is not on one person. It’s not on Matt Ryan.

“But we also know, as head coach and quarterback, it doesn’t matter. I’m judged on wins and losses. Quarterbacks are judged on points and turnovers. We understand that’s how it is in this league. Matt will be a pro.”

Ehlinger has appeared in three games and has yet to make a start in the NFL after being selected in the sixth round of the 2021 draft. He was a four-year starter for the Texas Longhorns and led the program to four bowl wins, including a 2019 Sugar Bowl victory over Georgia.