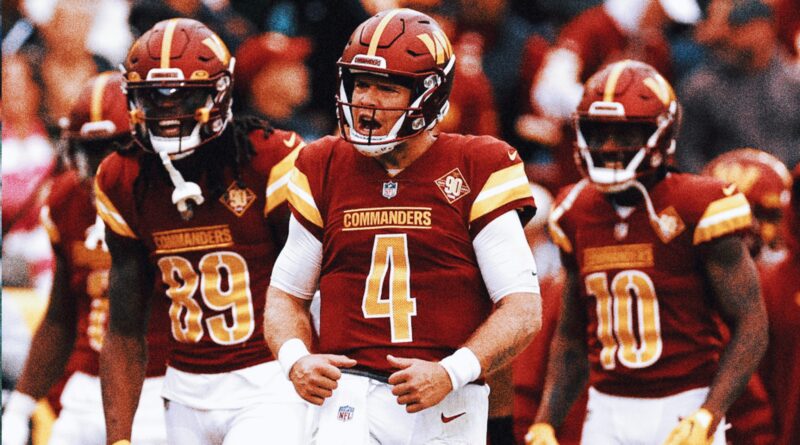 Taylor Heinicke was getting the second chance most players never get, to show the team that basically dumped him what it’s been missing. He was the Commanders’ starter a year ago, before they spent the offseason trying to replace him. Now he was back on the field, replacing his replacement, Carson Wentz.

And things didn’t start particularly well. Heinicke completed just one of his first seven passes. The seventh was picked off and returned for a touchdown.

That’s right about when the 29-year-old QB figured things couldn’t possibly get any worse.

“I go out there and play like it’s my last game,” Heinicke said. “Sometimes it’s good, sometimes it’s bad, but that’s just how I play. I think that’s when I do my best.”

It certainly could have been his last game, if that disastrous start continued, especially with young prospect Sam Howell looming on the sidelines. But Heinicke not only stopped the bleeding, he settled the Commanders offense down and hardly made any mistakes the rest of the way. He completed 19 of his next 26 passes for 187 yards and a touchdown, outplayed Aaron Rodgers and helped the Commanders (3-4) beat the Green Bay Packers 23-21.

Taylor Heinicke spoke with Pam Oliver after defeating the Packers 23-21. “This is a special one,” he said of the victory after replacing the injured Carson Wentz.

Maybe more importantly, over those last three quarters, he showed the Commanders — and coach Ron Rivera — what he can do for the offense that Wentz doesn’t, or at least hasn’t so far. Heinicke was more mobile and nimble in the pocket, staying out of trouble behind an injury-riddled line. Wentz, who’ll be out a month after surgery on a broken finger, was sacked an average of four times per game in his six starts. Heinicke was sacked just once.

And he achieved some of that with short, quick passes, instead of looking for the big play downfield. It was a conscious decision, not only so he could help his battered line, but so he could show his trust in his many weapons. He just wanted to get them the ball so they could make plays.

“The sooner I can get the ball out of my hands, the easier it is on the offensive line and the more completions I’ll get,” Heinicke said. “If I can get the ball in Curtis [Samuel] and Terry [McLaurin’s] hands, a five-yard throw and they can run 20 yards, that’s great. I’d rather do that than throw it down the field.”

Of course, he threw it down the field, too. His best was the go-ahead, 37-yard touchdown pass to McLaurin early in the third quarter — a pass down the sideline that dropped into McLaurin’s hands at the 1. Said McLaurin: “It’s almost like it just came to me out of the sky.”

Heinicke’s chemistry with McLaurin was huge — and significant. He had five catches for 73 yards and his first touchdown since Week 1. The coaching staff had been battling for weeks trying to figure out ways to get their $70 million receiver more involved in key spots. McLaurin’s frustration had begun to build, too.

And clearly he likes playing with Heinicke. He said when he lines up and surveys the defense, he’s confident Heinicke “sees the same thing.” Like on their big third-down conversion on their late-game, clock-killing drive with just over two minutes remaining. Heinicke, under pressure, threw to a very tightly covered McLaurin on the sideline and just trusted that he’d find a way to make a catch. And he did.

“When I see Terry out there one on one, they pay that guy a lot of money right?” Heinicke said. “So let’s give him a chance.”

McLaurin added: “For him and I to be able to connect on some big plays and for him to just have the trust in me to put the ball around me to make a play, that’s all I’ve ever wanted as a receiver.”

What more could a team want in a quarterback? Heinicke makes things easier on his offensive line. He trusts his playmakers. He gave a team that had been overshadowed by organizational turmoil and teetering on insignificance in what is otherwise the best division in football a much-needed emotional jolt.

“Taylor has a lot of energy in the way he approaches playing this game of football, and you can just tell he plays free spirited,” McLaurin said. “I think it’s a lot of what he’s been through in his career as a player and as a person. He plays like it’s his last game every single time. I think that energy spreads throughout this team.”

“The legend of Taylor Heinicke continues”

Daryl Johnston and Adam Amin break down the Commanders’ upset win over the Packers in Week 7.

To be fair, the undrafted Heinicke isn’t as talented as Wentz, nor does he have as strong of an arm. There’s a good reason the Commanders tried so hard to replace Heinicke after last season. The offense wasn’t good and he threw 15 interceptions. And he was bad down the stretch, averaging 161 passing yards while throwing four touchdown passes and five interceptions as Washington went 2-4 in the final month-and-a-half.

Also, to be fair, Heinicke had one big advantage on Sunday. The Commanders got strong performances from running backs Brian Robinson (20 carries, 73 yards) and Antonio Gibson (10-59), and Washington’s 166 rushing yards were a season-high — “a pretty good formula,” as Rivera said.

But still, in his first game in more than nine months, Heinicke was good against what is still, statistically, the No. 1 passing defense in the NFL. Once he shook off the “jitters” and his horrible start, he said he got comfortable in his old offense, “and the more comfortable you are the more confident you are.”

That rubbed off on his teammates, too. They appreciated what Rivera called his “underdog mentality” — which isn’t surprising, considering right now they are big underdogs, too. And that’s not likely to change for Heinicke. He knows Wentz will be back, probably some time in late November. So who knows how long this ride will last?

That’s certainly how he looks at it. He always has.

“Absolutely,” Heinicke said. “Two years ago I was out of the league, so every time I go out onto that field it’s an opportunity for me to go play like it’s my last time.

“Because you never know.”

All Heinicke really knows is that for now, he’s the starting quarterback again. And on Sunday, over the final three quarters, that looked like a very good thing for his team.