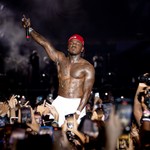 After facing mounting criticism, DaBaby posted apologies first on Twitter and later on Instagram, the latter of which was later deleted.

At Summer Jam, DaBaby opened his set with a video montage that also featured his voice-over, according to Vibe.

In video posted on social media and according to various reports, the rapper thanked New York radio station Hot97, which he said “allowed me to share my gift, share my blessing with y’all out here live on this stage amongst all the chaos and all the backlash. So hats off to y’all for that. … They accepted my sincerity and all my apologies when I said I never, ever meant to offend anybody or say anything to make anybody feel any type of way live on that stage a few weeks ago.”

He continued: “And Hot 97 was also willing to stick they neck out on the line, willing to go against all odds with everything going on out here in the world — they still allowed me to come right here on this stage and utilize their platform. They helped the world move forward and become a better place and not dismiss people off mistakes made like we ain’t human.”

According to Complex, after the video ended, DaBaby launched into “Cry Baby,” his hit with Megan Thee Stallion, and addressed the crowd live.

“Check this out,” he reportedly said. “Other than the people that, you know, was truly offended, I feel like the rest of y’all motherfuckers being cry babies.”

The Hollywood Reporter has reached out to DaBaby’s rep for additional comment.