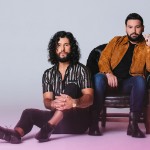 Mooney, Smyers and company show off some fancy footwork throughout the remainder of the “Steal My Love” video, weaving theatrics and dance choreography in and out of the ongoing heist storyline. The song itself features a smooth groove reminiscent of ’90s teen pop, spearheaded by stacked harmonies and Mooney’s glossy, endlessly versatile vocals.

Dan + Shay first premiered the “Steal My Love” video exclusively on Facebook. The song was penned by Smyers with Andy Albert, Ashley Gorley and Jordan Reynolds. (Reynolds was also a co-writer on Dan + Shay’s 2018 hit “Tequila.”)

“Steal My Love” is from the duo’s fourth studio album Good Things, which came out Friday and became the first country album of the streaming era to earn RIAA gold status on the day of its release.

Meanwhile, the album’s third single, “Glad You Exist,” sits atop Billboard’s Country Airplay chart, while “Steal My Love” enters the chart at No. 35, making it the week’s highest debut.

Earlier this year, the duo also announced rescheduled dates for their Dan + Shay The (Arena) Tour, featuring Ingrid Andress and The Band Camino. The tour is slated to launch Sept. 9 in Greenville, S.C.