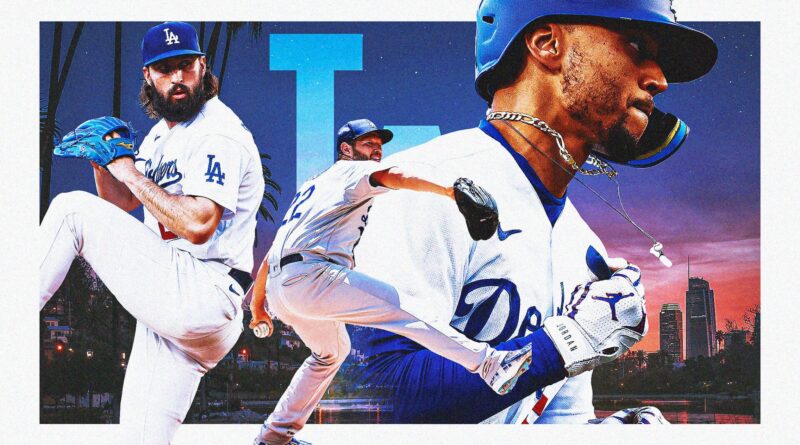 The first half of 2022 has demonstrated, in great detail, the extent of the Los Angeles Dodgers‘ advantage over their National League peers.

More than halfway through this season, their run differential is more than doubly as good as any of their competitors. The only team anywhere near them is, of course, the New York Yankees, who are running away with the sport’s most talented division.

Part of the story is the collapse of last season’s biggest surprise, the San Francisco Giants. They now sit sufficiently far behind the Dodgers to render a second-half National League West comeback almost inconceivable. The Padres, eight games behind after play Sunday and soon to welcome back Fernando Tatis Jr., remain a threat. But the Dodgers don’t have to fear the Giants like they did a year ago.

A larger part of the Dodgers’ story, in the absence of expected ace Walker Buehler and others, is the sudden development of some unexpected pitchers into top-of-the-rotation quality starters. The Dodgers have long valued Tony Gonsolin. They have valued him longer than any other team, in fact, given that they found him shortly after he went undrafted in 2015 and offered him a chance to begin his professional career on the spot.

He was an outfielder then and only a part-time reliever. They saw his athleticism and potential early, but even they did not see him as the sort of starting pitcher who could consistently work deep into games.

Dodgers starter Tony Gonsolin tells Ben Verlander how he bounced back from a shoulder injury in 2021, what he did to level up for the 2022 season, his mentality on the mound and how Dave Roberts helped his mindset.

This season, that has changed out of necessity. Since Clayton Kershaw went on the injured list in mid-May, Gonsolin has averaged 90 pitches and more than six innings in his 10 starts. Not once in 2021 did the Dodgers let him hit that pitch count. Not once in 2020 did they permit him to surpass that innings number.

At 28, Gonsolin has turned into the sort of pitcher who could start a postseason game — and not as an opener, as he did in 2020. His 11-0 record and 1.62 ERA reflect that. Gonsolin began the season splitting starts with left-hander Tyler Anderson in what amounted to a rare piggyback arrangement. That also ended when the injuries added up.

Anderson has himself been a solid starter, nearly All-Star-caliber. If he’s the Dodgers’ fourth starter come the National League Division Series, that shouldn’t be a problem. Anderson is a veteran journeyman who signed after Saint Patrick’s Day.

It’s an unconventional, unexpected sort of success the Dodgers are experiencing in 2022.

Consider their situation this way. Gonsolin, Anderson, Julio Urías and, of late, Kershaw have all been effective this season. Buehler remains shut down because of a flexor strain and surgery to remove a bone spur from his elbow, but he could return in September. Dustin May is on track to return from 2021 Tommy John surgery sometime in August. If either of those pitchers reemerges at or near his past peak, the Dodgers will have a rotation to rival San Diego’s deep group of starters.

Dodgers’ depth is unparalleled in baseball

Ben Verlander dives into the depth of the Los Angeles Dodgers and their success even without key players Clayton Kershaw, Mookie Betts, Dustin May and Walker Buehler.

Consider their situation this way, too. It’s traditional for the team hosting the All-Star Game to send its top power hitter to the Home Run Derby. Who will represent the Dodgers in that competition next week at Dodger Stadium?

Mookie Betts, who’s starting the All-Star Game, leads the team in home runs, but he is not a traditional power hitter. He also just recovered from a significant injury. Trea Turner, starting the game at shortstop, is even less of a power hitter and told reporters he would not participate.

Freddie Freeman has tried this before, and it didn’t go well. Cody Bellinger and Max Muncy have done it before, too, but their statistical lines this season are not exactly impressive.

Will Smith might make the most sense. The Dodgers’ SportsNet L.A. broadcast reported Saturday that he is open to participating. He’s an elite hitter for a catcher, but he also has never surpassed 25 home runs in a season and isn’t on pace to do so in 2022.

Again, it’s an unconventional, unexpected sort of success the Dodgers are experiencing. Betts, Turner and Freeman have hit to their career norms. Former top prospect Gavin Lux is reestablishing what his career norms could be. But so many others — namely Bellinger, Muncy and Justin Turner — have struggled to even approach expectations.

Because of an injury to Chris Taylor, the Dodgers are currently platooning journeymen Jake Lamb and Trayce Thompson in left field. Neither player was on the 40-man roster three weeks ago. Not that it has mattered. The two have combined for four homers and an OPS over 1.000 in their first 66 plate appearances.

Yes, the Dodgers would like a couple of their struggling stars to find their form before October. But they are far ahead in the division, and they will be well-represented at the All-Star Game.

Their ways have worked so far.

Pedro Moura is the national baseball writer for FOX Sports. He previously covered the Dodgers for three seasons for The Athletic and, before that, the Angels and Dodgers for five seasons for the Orange County Register and L.A. Times. More previously, he covered his alma mater, USC, for ESPNLosAngeles.com. The son of Brazilian immigrants, he grew up in the Southern California suburbs. His first book, “How to Beat a Broken Game,” came out this spring. Follow him on Twitter @pedromoura.