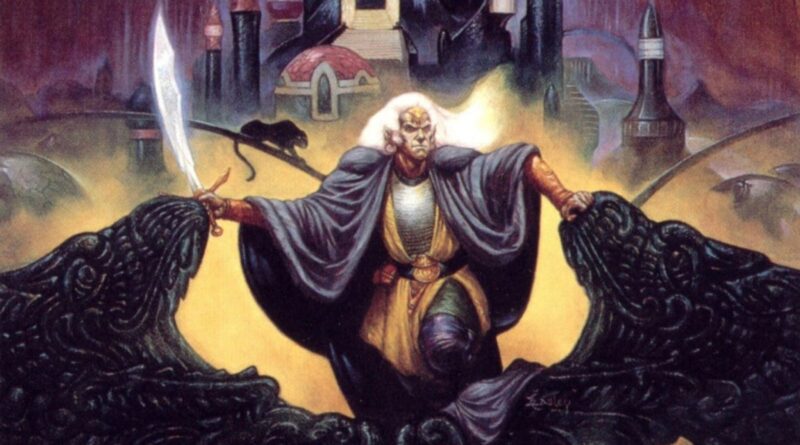 After the success of The Icewind Dale trilogy and the immense popularity of its breakout star, Drizzt Do’Urden, R.A. Salvatore was inevitably going to explore how the one non-evil drow elf in the Forgotten Realms became… well, non-evil. The result was the Dark Elf trilogy, which began with Homeland. It was by far my favorite Dungeons & Dragons novel when I was a kid, and now, 30+ years later, it still is.

Homeland chronicles Drizzt’s life from his birth to the moment he leaves the Underdark and enters the surface world for the first time, but its greatest strength is how it explores drow society, which up to that point was best summarized as “very evil.” Prior to Drizzt, in the vein of orcs, trolls, and primary-colored dragons, the Drow were essentially categorized as more monsters for players to battle and defeat. Their skin was obsidian black, earning them the alternate name of dark elves, and marking them as the evil counterpart to the good and heroic lighter-skinned elves of the surface.

The problem with this is obvious, and already felt weird to me back when I was 13. When the drow were one-dimensional bad guys in the Monster Manual, it was easier not to think about the incredibly awful decision to make a dark-skinned race uniformly evil. But when Salvatore introduced Drizzt in 1988’s The Crystal Shard, players/readers who hadn’t been bothered this by were forced to acknowledge the correlation because characters in the Forgotten Realms judged Drizzt by the color of his skin. He was distrusted, despised, and discriminated against, often even by those he helped.

I don’t know how conscious Salvatore was of arguably setting Wizards of the Coast on its journey to reckon with Dungeons & Dragons’ racism problem back then—although he certainly is now—by presenting the idea that even a drow could be a hero, but it was a path he trod more solidly in Homeland. While drow society is evil (it’s also a matriarchy, which isn’t a good look either) Salvatore takes care to point out Drizzt isn’t alone, and not every elf living in the underground city of Menzoberranzan is chaotic evil.

Sounds good
These headphones have stunning sound range and quality, up to 15 hours of playtime, can switch between two Bluetooth devices at a time, and look great.

Zaknafein, the weapon master of House Do’Urden and the secret father of Drizzt, finds drow society horrible but feels utterly trapped in it. Drizzt’s sister Vierna, who’s placed in charge of Drizzt for his first 13 years, has moments of care for empathy for her little brother, who was originally destined to be sacrificed as the unneeded third son of Matron Malice Do’Urden. (Luckily, Drizzt’s older brother Dinin murdered Drizzt’s oldest brother Nalfein that same night, upgrading Drizzt to the second son.) Unfortunately, the indoctrination that Vierna was raised with usually reasserts itself, and Vierna often punishes Drizzt for the non-evil thoughts he inspires in her.

Admittedly, those are pretty much the only three people we know who have some degree of good in them in a thriving, malicious cast of dozens. But Salvatore takes care to point out drow aren’t born evil, they’re raised evil. Here’s an anguished thought from Zaknafein, after watching Drizzt explore the Do’Urden weapon room with unbridled, non-sadistic happiness.

“Are they all like that?” he asked into his nearly empty room. “Do all drow children possess such innocence, such simple, untainted smiles that cannot survive the ugliness of our world?”

It’s not much, and yes, the vast majority of characters in Homeland are unabashedly evil. But it’s hard not to draw a line from Homeland to the problems Wizards of the Coast is trying to address now.

But where Homeland really shines—what hooked me as a kid, and what I still find fascinating now—is how thoroughly Salvatore examines drow society and the city of Menzoberranzan. From the cult of Lolth, the spider-goddess, to the matriarchal houses constantly scheming to destroy the others, to their equally Machiavellian education system, to the brutal class structure, Salvatore explores it all. He gives equal attention to the architecture and art of Menzoberranzan, and he’s gained enough skill to describe it with aplomb. What would look like utter darkness to us is a world of vivid color for the drow, whose nightvision (the D&D term for being able to see the infrared spectrum) is unparalleled. It’s augmented by magic and the elves’ ability to shape stone into works of art, ornate houses, and more.

Through all the Forgotten Realms novels I’ve read, the realm itself has always filled like generic, Tolkien fantasy. Which is fine, and exactly what I wanted as a kid! But Homeland took me beyond D&D’s generic fantasy campaign setting into someplace I’d never been before, someplace utterly foreign and fascinating. And just as importantly, Homeland wasn’t a D&D game retrofitted into a novel; it was a coming-of-age story about a kid who’s born into a cult and manages to resist its brainwashing and escape into a new world… where a new series of problems await him.

It was unlike any other Dungeons & Dragons novel I’d read at the time, and I’m pretty sure it still is—and that includes the other book in the Dark Elf trilogy, Exile and Sojourn. I have no idea if that will change as I start getting into the novels I didn’t read as a kid, but for now, I say Homeland rolls a critical hit—a natural 20. It’s as good as I suspect a classic D&D novel to get, but I am very willing to be proven wrong. Given that there are 34 more Legend of Drizzt novels to read, this could be a horrible choice that will force me to recalibrate the entire score system at some point, but oh well.