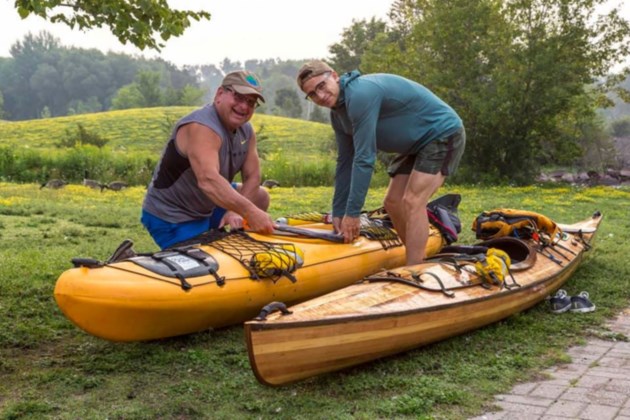 Father-son team kayaking Lake Superior for a worthy cause

A local father-son duo is kayaking roughly 300 kilometres of Lake Superior over the course of the next couple of weeks in order to help raise both awareness and money for the Lake Superior Watershed Conservancy (LSWC).

“I wanted to discover a lot for myself, but I also wanted to be able to share it with others and help fundraise for Lake Superior Watershed Conservancy, because it’s been a tough year for a lot of different organizations – especially non-profit organizations – without being able to get out and do events,” said Greve, speaking to SooToday from Ile Parisienne. “So I thought it might be a good opportunity to combine my love for paddling with a little bit of funds that will help support them in their mission, and keep them going.”

They plan on paddling about 30 kilometres each day until they reach the mouth of the Michipicoten River in mid-August.

“It’s one river to another river, but it also signifies two communities that are connected by this great lake. I would love to do a further trip and go further along the coast, but unfortunately, I don’t have enough time off to do that,” said Greve, laughing. “Maybe in the future.”

Greve, who is currently enrolled in an accelerated nursing program at the University of Western Ontario in London, describes the kayaking adventure as a good change of pace from everyday life.

“Today is just the second day, but so far, it has been…what’s the words I can use to describe it? It’s been a great change of pace to be able to be on the water. I really enjoy being on the water,” he said. “I’ve been in school all year round. I just finished my last exam last week, so getting on the water is kind of like a breath of fresh air, and I’m eager to see new things and learn.”

Greve began preparing for the trip about six months ago, pulling together all the watercraft-appropriate gear needed to complete the trek. He had some of his own gear – including a cedar-strip kayak made by the father-son team – but family and friends also pitched in to lend him some gear as well. The food, dehydrated and prepared by Greve’s mother, is intended to be light and compact.

“Everything that we need on the trip is packed into our kayaks, so we have to be a little bit selective about what things we bring, and what we’re actually going to need,” he said.

“I understand that it’s a difficult year for a lot of different people, so I didn’t really want to make a target, but I think anything I can do to help will make me happy in the long run, and what people can offer is awesome,” said Greve. “And even just people who are able to share and follow along in the journey, I think that builds up a lot of the awareness and spirit that’ll help LSWC in their mission.”

Donations to LSWC can be made through the organization’s website.