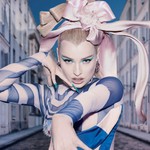 The princess of pop has finally returned! After a brief hiatus, Petras officially burst back onto the scene with “Future Starts Now,” the first single off of her hotly anticipated debut album, and her first single since officially signing to Republic Records. The ’80s Euro-dance track sees Petras cruising in a familiar lane, as pounding beats and catchy synths accompany her slick vocals as she croons about not looking back, and plowing forward into her new, pop-fueled era. “Ain’t nobody gonna stop me/ Don’t you let the music stop now,” she sings on the track. “You’re more than just anybody/ Don’t give up, the future starts now.”

Halsey, If I Can’t Have Love, I Want Power

To anyone who ever doubted the depth of talent and artistry that Halsey wields at any given moment, may we introduce you to If I Can’t Have Love, I Want Power. The singer’s fourth album, appropriately produced by Nine Inch Nails’ Trent Reznor and Atticus Ross, goes far beyond what some expected — namely, her long-awaited rock album. Instead, the constantly changing, genre-bent project sees them taking on punk (“You Asked For This”), hip-hop (“Lillith”), and straight-up pop (“Girl With a Gun”), all while narrating a complex tale of pregnancy, birth and motherhood. If I Can’t Have Love is the kind of album that will keep you thinking for hours after listening to it, and it’s for that reason that you should absolutely press play now.

Rina Sawayama has made a name for herself as a genre-bender. So it’s no surprise that when she was tapped to tackle Metallica’s “Enter Sandman” for their 30th anniversary covers album, she put her own spin on the classic. Throughout her cover, Sawayama leans into the guitar-heavy shredding of the original, while doubling down on her own pop sensibilities — adding in smashing drum machines, chill-inducing vocal distortions, and the kinds of glitchy, hard-to-pin down production flourishes that made her debut album such a smashing success. Head off to Never Never Land with this fabulous cover, courtesy of Rina Sawayama.

For the last few of his releases, singer-songwriter Wrabel has leaned into depicting happier loving relationships. But with “London,” he’s back in his feelings with an emotionally devastating and viscerally gorgeous new song. Accompanied by a guitar and some light drums, the teary-eyed new song sees Wrabel reflecting on missed opportunities in a relationship that has long-since ended. “Sometimes when it’s cold in California/ I think back to that winter with you,” he sings. “‘Cause living in Los Angeles the skies are always blue/ Sometimes I miss London.”

It’s been six years since A Great Big World shared their last album with the world, and if the contents of their third studio album are anything to go by, then it’s clear that the duo has grown in that time. Throughout Particles, Ian Axel and Chad King wax poetic on everything from becoming parents (“Glowing”), to OCD (“Save Me From Myself”), to reflections of sexuality (“Boys In the Street”) and finding the one that you want to be with (“The One”). It’s a beautiful album filled with excellently-written songs and the kind of sentimentality that will have you reaching for the tissues.