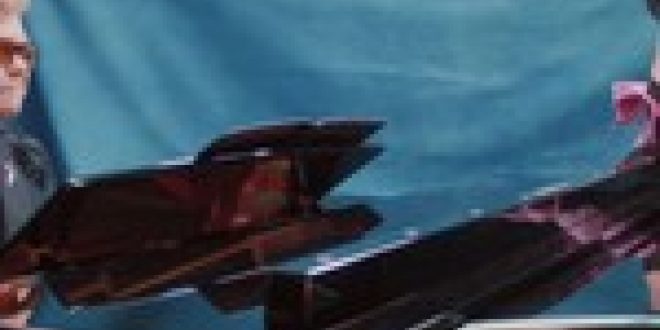 When she originally released “Chosen Family” back in 2020, Rina Sawayama unveiled a brand-new anthem of queer acceptance. So what could possibly make the song any more poignant? Getting Sir Elton John to join her is a good start. The new version of “Chosen Family” feels more tender and more personal, even though all that’s changed is the addition of a simple piano line and John’s vocals through out. Sawayama’s new collaboration with Sir Elton feels like it lives up to the song’s title, illustrating what having a chosen family in the LGBTQ community can actually mean.

“This song, I thought, ‘God, this is exactly what we need to be saying right now.’ It’s a song about peace,” John told Sawayama of the track on the latest episode of his Apple Music 1 radio show Rocket Hour. “I don’t care if someone wants to vote Republican or Democrat or be gay or be straight or be Asian or be Black or be Indian. I didn’t care about that. But people are using that to stir up hatred. And I don’t know whether they mean it or not. I just think they’re stoking the furnaces, and I don’t like it.”

Regard, Troye Sivan & Tate McRae, “You”

If there ever were a group of artists capable of putting their talents together to make a certified bop, it would be Troye Sivan, Tate McRae and Kosovan DJ Regard. “You,” the trio’s brand-new single, is a synth-laced, lovestruck jam session, where all three artists pine for that one person they just can’t seem to get out of their minds. Regard’s smooth-as-silk production perfectly blends with Sivan’s laid-back, sonorous vocals, which bleeds perfectly into McRae’s breathy falsetto voice. “You” is bound to get stuck in your head sooner or later, so why not make it happen right now?

Girl in Red, “You Stupid Bitch”

Have you ever wondered if the voice behind soft, tender ballads like “We Fell in Love in October” ever gets pissed off? Well you won’t have to wonder after listening to Girl in Red’s latest single: “You Stupid Bitch” lands like lighting from its very first beat, letting listeners know that this is a different Girl in Red. The plugged-in, rocked-out production perfectly matches Marie Ulven’s furious energy, as she delivers a blistering wake-up call to the girl she can’t get over, singing “You stupid b—h, can’t you see?/ The perfect one for you is me.”

Chicago alt-rockers Beach Bunny knew that they wanted to get some special guests for their revisit of 2020’s “Cloud 9” — and they found the perfect candidates in Tegan and Sara. Keeping the original’s beach-rock sound fully intact, the new version of “Cloud 9″ stands apart when the sister duo jumps in for the viral song’s second chorus, adding their brand of harmonized, indie-rock perfection to the already excellent track.

“We’re massive fans of Beach Bunny, and when we heard ‘Cloud 9’ for the first time fell in love with the brilliant lyrics and addictive melody,” Tegan and Sara said in a statement about the song. “We love that Lili was up to let us experiment with changing the pronoun in the chorus to she. The efforts made to make the song relatable to everyone, isn’t just about inclusivity, we think it’s a great indication of the flexibility and creative spirit of the band at its core!”

In his first album since leaving Warner Records, ILoveMakonnen is making sure that his voice is being heard the way he wants it to be. Throughout My Parade, Makonnen plays around with new sounds, from psychedelic funk (“If It’s Cool”), to classic trap (“Whoopsy”), to even an acoustic session (“My Parade”). But one think stands out on the new project — Makonnen remains more confident and clear-eyed than on any record before, as he embraces his own artistry to its fullest extent yet.

“The My Parade project  is my first album being back in control over my art and creativity,” he says of the album. “It’s about celebration of self and having your own parade even if the world is raining down on it. My Parade album is a collection of genre bending styles that I like to experiment in and showcase my versatility as an artist putting no limits on my musical expression. It’s for my fans who appreciate and enjoy all of the different eras of ILoveMakonnen’s music so far and for new ones joining in now on my artistic journey. This is releasing music in its purest form. The artist creates and then releases it to the world. No major label, no distributor.”

Ethel Cain isn’t one for beating around the bush — when she’s interested in you, she’s gonna get right down to business. On “Unpunishable,” the up-and-coming singer-songwriter writes with pleasure (and yes, some pain) as she lets her lover know that she should be more than enough for them. The subtle distortion on her vocals, mixed with the tension-building rhythm, make for a gratifying new single, as she wails “Red and blue, used and abused/ It’s still never enough, I’m unpunishable.”