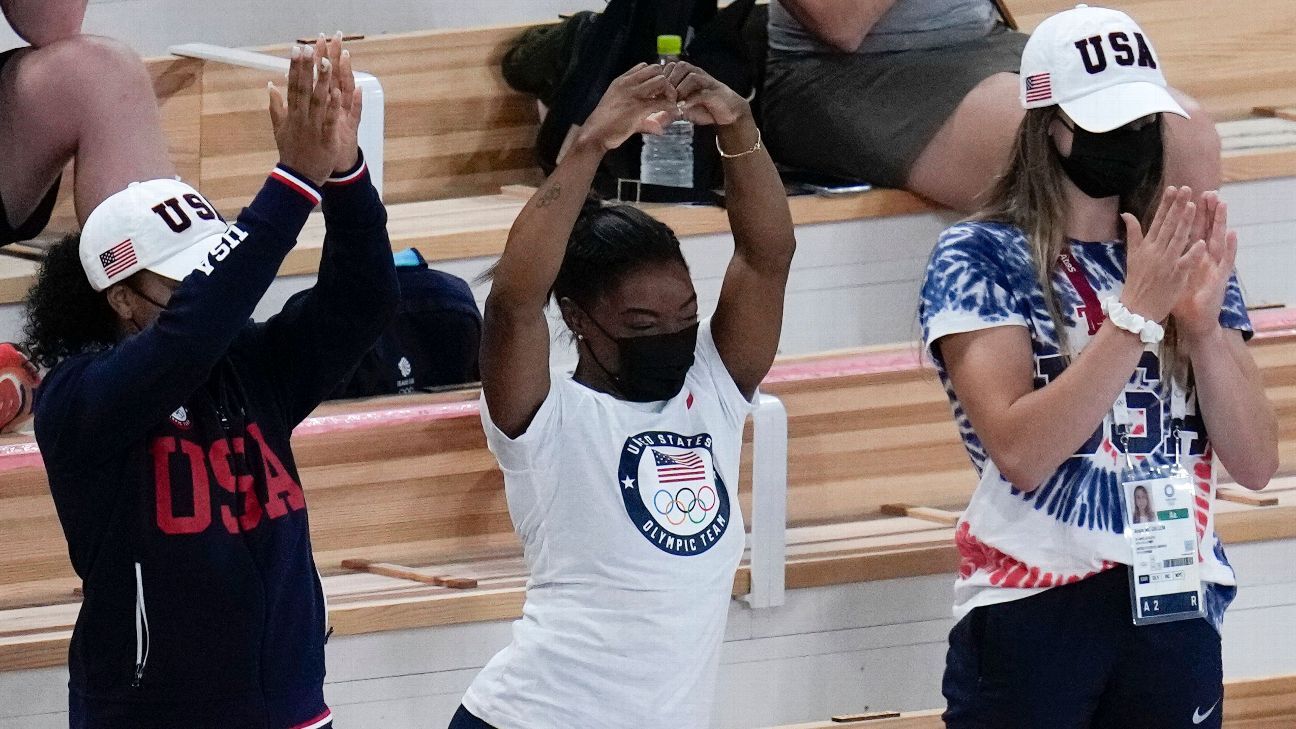 TOKYO — Athletes didn’t have their family members in the stands cheering them on. The stadiums and venues were largely empty. There were nonstop COVID-19 protocols and restrictions — and a looming threat of testing positive for the virus and being deemed ineligible to compete in the Tokyo Games.

It wasn’t the Olympic experience anyone had dreamed about as a child.

But hundreds of athletes stepped in to be the support systems and cheerleaders for one another. There was little doubt the athletic performances would still be, well, gold-medal worthy, but it’s the sportsmanship and camaraderie that will be perhaps what everyone best remembers about these Games.

There were countless displays of it over the past two weeks, but here are some that we’ll be thinking about long after the closing ceremonies:

Biles as the ultimate team player

Simone Biles’ legendary career has been filled with memorable moments and unbelievable highlights, but the images of her in the stands at Ariake Gymnastics Centre night after night, loudly and enthusiastically cheering on her teammates, might be one of the most lasting memories of all.

After experiencing mental blocks so severe she had to withdraw from the team final after just one event, Simone Biles didn’t dwell in her own personal disappointment and instead turned her focus to her new role: hype woman.

She did exactly that throughout the rest of the competition as her teammates — Sunisa Lee, Jordan Chiles and Grace McCallum — stepped up in the absence of the superstar and won the silver medal.

The 24-year-old Biles later withdrew from the all-around competition, as well as the event finals in vault, uneven bars and floor exercise. Still, she was seen — and heard — at every competition cheering on her teammates, and even those athletes from other countries. She was frequently the loudest one in the building.

“It’s seriously cool to see her love and support, and her cheering us on,” said MyKayla Skinner, who replaced Biles on vault and won a silver medal.

“And I knew she was going to be the loudest one in there because she’s like, ‘I want you to make podium, I want you to medal.’ She’s just been so awesome in the last couple of days. And after everything she’s gone through, it’s really cool to see how strong she’s being.”

When Biles made her return on the balance beam on the final day of the competition, her teammates loudly and tearfully returned the favor as they supported her from the stands. Chiles was emotional as Biles earned the bronze.

Japanese skateboarder Misugu Okamoto had entered the park finals in first place and was looking to secure a medal in the sport’s Olympic debut.

But the 15-year-old couldn’t land her biggest trick and she fell to fourth place in the standings. A devastated Okamoto lay on the ground and put her hands on her helmet while visibly crying. She was clearly still distraught as she began to walk out of the bowl, and her opponents went to her side to lift her up — literally and figuratively.

They consoled and embraced her in a group hug, and then carried her on their shoulders. Despite her disappointment, Okamoto couldn’t help but smile.

Okamoto later told reporters she was “full of regret” over her performance but was “grateful” for her fellow competitors.

A gold-medal victory made even better

Round by round throughout the high jump competition, Mutaz Essa Barshim of Qatar and Gianmarco Tamberi of Italy were locked in a fierce battle that lasted over two hours. Both had perfectly executed their first six jumps up to 2.37 meters.

Neither was successful in any of their three attempts at 2.39 meters and an official proclaimed the next step in determining the gold medal winner was a jump-off. Upon hearing the update, Barshim asked, “Can we have two golds?”

As soon as the official said, “It’s possible, yes,” the two foes were locked in a congratulatory hug and celebrating their joint victory.

The two have been close for over a decade — Tamberi was even in attendance for Barshim’s wedding — and it made the moment even sweeter for both men.

“He is one of my best friends, not only on the track, but outside the track,” Barshim said later. “We work together. This is a dream come true. It is the true spirit, the sportsman spirit, and we are here delivering this message.”

When Mutaz Essa Barshim and Gianmarco Tamberi finished the men’s high jump competition tied, they could have gone to a jump-off to decide the winner.

Instead, they decided to share the gold, and their reaction is what we love about sports. #TokyoOlympics pic.twitter.com/ALTyeysC8t

South Africa’s Tatjana Schoenmaker had a dominant performance in the women’s 200 meter breaststroke to win the gold medal — and break a world record. When the result and time flashed on the screen, Schoenmaker was thrilled, and she began to cry while still in the pool.

Americans Lilly King and Annie Lazor, who finished with the silver and bronze medals, immediately flanked her to celebrate, as did Schoenmaker’s teammate Kaylene Corbett. Lazor could be heard saying, “So amazing — congratulations!”

Schoenmaker later said the camaraderie made the race even more memorable.

“I feel that it was such a special race, knowing that we could celebrate each other’s victories,” Schoenmaker said. “That the competition in the pool, and outside the pool we can be happy for each other, motivate each other, and say, ‘Good luck.’

“Sometimes, everyone wants to be focused, and you don’t want to take anyone out of their race. But it was nice that we could say, ‘Good luck,’ and knowing that we were going to give our all in that race, and then celebrate together.”

THIS IS WHAT THE OLYMPICS ARE ALL ABOUT ❤️#TokyoOlympics pic.twitter.com/ucgIh3P9zA

Rounding the final turn in his semifinal heat of the 800 meters, American Isaiah Jewett was ready to start his kick to complete the race when the back of his heel appeared to hit Botswana’s Nijel Amos. They both went down.

Their Olympic dreams seemed to be immediately over. The two men helped each other up, hugged and walked with their arms around one another to the finish line.

Their time was 54 seconds behind the heat winner, but Jewett knew it wasn’t when they finished, but how, that was the most important.

“Regardless of how mad you are, you have to be a hero at the end of the day,” Jewett said. “Because that’s what heroes do — they show their humanity through who they are and show they’re good people.”

Amos was ultimately reinstated into the final on appeal, and he finished in eighth place, but that’s not what he or Jewett will be remembered for during these Games.