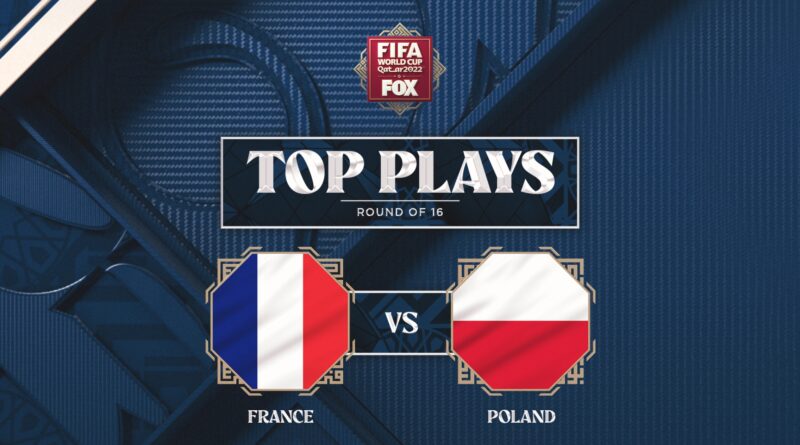 France took down Poland 3-1 at Qatar’s Al-Thumama Stadium in the 2022 FIFA World Cup‘s third match of the round of 16.

The usual suspects stepped up for France in its win to advance to the quarterfinals. Olivier Giroud scored late in the first half to give it a 1-0 lead and Kylian Mbappé scored twice in the second half to complete the victory.

In what was likely his final World Cup match, Robert Lewandowski scored on the match’s final play on a penalty kick to send him out on a somewhat positive note.

The winner of England-Senegal (2 p.m. ET, FS1 and the FOX Sports app) will take on France in the quarterfinals, which begin Dec. 9.

13′: Szczęsny starts where he left off

After recording nine first-half saves in Argentina, Polish goalkeeper Wojciech Szczęsny made a diving save on Aurelien Tchouaméni’s promising strike to keep the game scoreless.

21′: Robert Lewandowski looking for a goal

The Polish star nearly made a spectacular goal happen as he searched to give his team a 1-0 lead in its hopes of upsetting France.

Olivier Giroud’s redirection in front of the net went just wide as France appeared to have Szczęsny beat, leaving the match scoreless. The goal also would’ve given Giroud the French record for most goals in international play.

The French star faked out a Polish defender and nearly scored one of the top goals of the tournament – but his shot went just wide of the net.

38′: Poland created chaos but was somehow unable to score

Poland was able to get multiple shots in front of the net with France off-guard. However, Hugo Lloris stepped up to make a save while France’s defense was able to make a collective save off the line to keep Poland off the board.

44′: Giroud makes it happen for France

The French finally broke through when Giroud got away from the pack to get one-on-one with the goalie and scored right off the pass to give France a 1-0 lead. It also gave Giroud the all-time French record for most goals in international play.

After scoring a goal earlier in the match, the new all-time French scoring leader tried to one-up himself with a bicycle kick. His shot went just wide of the post, keeping the match at 1-0.

France’s Olivier Giroud gets off bicycle kick after foul whistle

France’s Olivier Giroud got off an unreal bicycle kick after the foul whistle was blown in the 2022 FIFA World Cup against Poland.

The French superstar got the insurance goal by perfectly placing his shot in the top left corner to beat Szczęsny and make it 2-0.

France didn’t need another goal, but Mbappé got it one. He somehow hit the top right corner while kicking the ball around a Polish defender to give France a 3-0 lead.

Watch France’s Kylian Mbappe scoring a goal against Poland in the 90′ in the 2022 Men’s FIFA World Cup.

The Polish star likely finished his World Cup career by scoring a goal on the match’s final play.

The sensation of Mbappé

France manager Didier Deschamps broke down what makes Kylian Mbappé so special as the 23-year-old has already scored three goals in this World Cup.