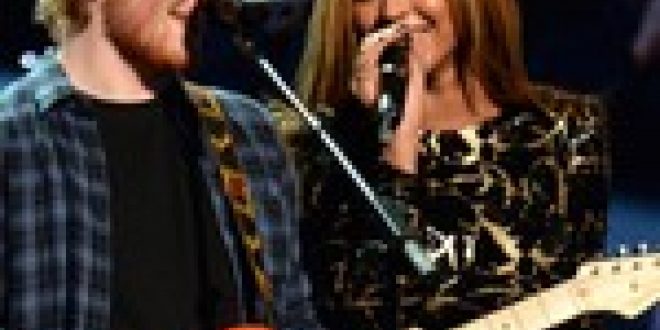 The song’s title is an understatement of its performance. Sheeran and Queen Bey’s raw vocals mixed together on top of an acoustic guitar are the three simple ingredients to this sweeping romantic ballad. Their tender harmony for the last round of the chorus is exactly what a couple during the first dance of their wedding needs to hear. “Perfect” climbed to No. 1 on the Billboard Hot 100 on the strength of the Beyoncé remix in December 2017.

Swift and Sheeran are dusting off their “Everything Has Changed” duet and re-recording it for Red (Taylor’s Version), but we just hope it opens up the doors to more (new) hits between the two. The original 2012 track about two friends falling in love made their dual fanbases fall in love with how their soft voices fit like two pieces in a puzzle.

After writing Bieber’s Grammy-nominated song “Love Yourself,” the two pop stars properly paired up for their carefree jam. Sheeran went back in his dancehall bag for the summer anthem, catering to those who are at a party they don’t want to be at and to those are loving every minute of it on the dance floor.

Sheeran steps into The Weeknd’s darkness for the song from the latter’s 2015 album Beauty Behind the Madness. While he’s no stranger to moody music, Sheeran lamenting about being addicted to his vices and telling a loved one to heed his warning that “This ain’t the right time for you to fall in love with me” fits in line with The Weeknd’s melancholic alt-R&B discography.

The English singer is the bridge between two popular Latina artists — Cuban-American pop star Cabello and Dominican-Trinidadian rapper Cardi — on the Spanish-English pop track. From working on K-pop dance anthems to Latin bangers, Sheeran knows how to plot his musical savvy all over the world, but “South of the Border” showcases how he expertly finds his window within two international stars’ vocal ranges while staying in his lane.

Slim Shady recruited Sheeran for the moving song about a man who wishes to be washed from his sins after a doomed relationship results in an abortion. Between Eminem’s introspective bars and Ed’s wailing chorus, these two maintain incredibly vivid storytelling that gives listeners’ a microscopic outlook on the main subject’s dilemma.

Fellow English artist Stormzy gets Sheeran and Nigerian hip-hop artist Burna Boy into the swing of his South London flow on the “Own It” bop that’s bound to make anyone’s hips swing. At the intersection of U.K. grime and Afrobeats, Sheeran’s dancehall-inspired pop finds its light and takes its listeners straight to the club.

The Grammy-winning duo ended their three-year musical hiatus with an Ed Sheeran collab that acts as Macklemore’s confession of love for his newborn daughter Sloane. Even though the English singer-songwriter didn’t become a dad himself until five years after the song’s release, he brings the right amount of warmth, affection and fatherly adoration for his baby in the hook when he sings, “I’ll be patient, one more month/ You’ll wrap your fingers ’round my thumb.”