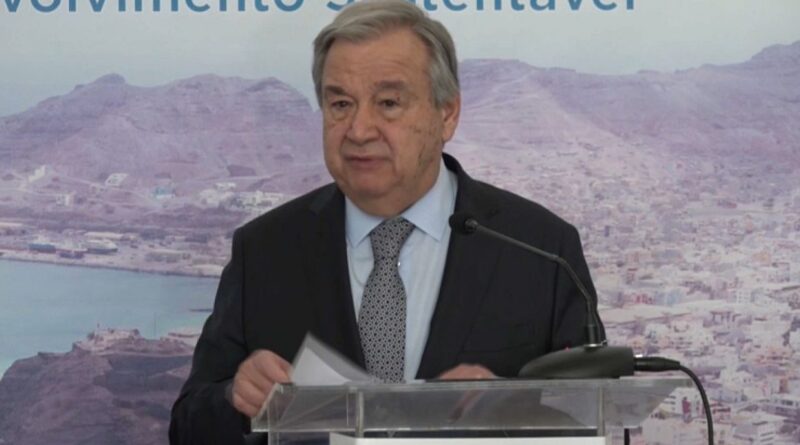 He also plans to observe some of the solutions being considered to help protect the 10-island archipelago off the coast of Africa.

Speaking to journalists, Guterres said, Cabo Verde “is on the frontlines of the existential crisis generated by climate disruptions” as it has “faced a severe drought” as well as sea level rise and loss of biodiversity and ecosystems which “present an existential threat to this and many other archipelagos.”

He added that he was “profoundly frustrated by the fact that world leaders are not taking the necessary action and making the investments needed to face this life and death emergency.”

The Secretary-General said: “We need justice for those who – like Cabo Verde – have practically done nothing to provoke this crisis, but who are paying a very high price. Cabo Verde had demonstrated climate leadership with words and deeds.”

In the past five years, the country has held an ‘Ocean Week’ every year and, on this coming Monday, Cabo Verde is partnering with the Ocean Race to hold a summit that will feature speakers from all over the world, including the Secretary-General.

Cabo Verde is hosting leg one of the Ocean Race, and Guterres visited the 11 boats participating.

The Secretary-General lauded the “example of Cabo Verde” against a backdrop of, “many political leaders not paying attention to the central issues that threaten humanity.”

He said: “To be able to show the example of Cabo Verde, is for me extremely important and gratifying.” In the last few years, Cabo Verde fishermen have noted a drop in the capture of black mackerel, one of the most popular fish among the locals. In 2022, the packaging industry reported a reduction in the capture of tuna and absence of black mackerel, raw material for the industry.

According to the preliminary results of a UN-led assessment that should be presented and discussed with key national stakeholders early this year, by 2100, the biomass of large pelagic fish, which live in the pelagic zone of ocean or lake waters, being neither close to the bottom nor near the shore, such as albacora, a species of tuna, is expected to decrease by up to 45 percent.

In the neighboring Senegalo-Mauritanian basin, the reduction will be even greater.