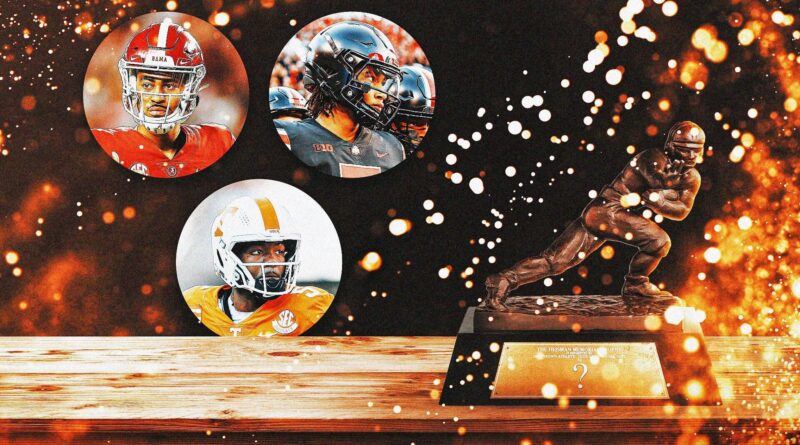 Four weeks into the season, conference play is heating up, and the Heisman Trophy race is, too.

While some players were solid and others struggled, one player in particular made a big statement — the defending Heisman winner himself, Bryce Young.

Check out our FOX Sports staff picks from earlier this week …

… then see how the leading Heisman candidates heading into Week 4 fared Saturday.

One expects the mighty Buckeyes to roll over lesser nonconference competition. One does not necessarily expect them, however, to make things look easy against a Big Ten rival like Wisconsin. But that’s what happened on Saturday, and Stroud, naturally, was at the center of it.

Stroud only threw 27 passes, completing 17 of them. But those completions went for 281 yards and five touchdowns, to only one interception. Ohio State rolled out to a 28-0 lead early in the second quarter and breezed to a 52-21 victory.

Corvallis is a difficult place to play, and Oregon State appears to be a pretty good team. So maybe give the Beavers some credit for harassing Williams into a subpar performance.

The QB was just 16-for-36 for 180 yards. He only threw one touchdown pass, but he didn’t throw any interceptions. And perhaps most important, his TD turned out to be the game-winner in the Trojans’ 17-14 victory.

On Saturday, Young had one of those games that reminds everyone why he won this award last season. It was only Vanderbilt, you say? That shouldn’t really matter when you’re this good.

Young torched the Commodores, completing 25 of his 36 passes for 385 yards, four touchdowns, no interceptions and a QBR of 195.9. And he did all that in three quarters of play.

Young is having another dominant season, dropping dimes with regularity, and Alabama will carry a 4-0 record into its big game at Arkansas next week.

Bennett was mostly solid, completing 27 of his 36 pass attempts for 272 yards. But he also threw an interception against no touchdown passes, not exactly what you want to see against an overmatched foe.

Defensive players don’t tend to get the Heisman buzz of their offensive counterparts, but the more you watch Anderson play, the more you know he belongs on this list.

Anderson was his usual dominant self against Vanderbilt on Saturday, racking up five tackles, two tackles for loss and 2.5 sacks in Bama’s 55-3 victory.

Still doubt his importance to the Tide? Nick Saban knows …

The No. 6 Sooners were stunned at home by Kansas State on Saturday, 41-34. But it’s hard to pin too much of that on Gabriel.

The lefty quarterback went 26-for-39 for 330 yards and four touchdowns, and he didn’t have any interceptions.

Really this was more about the Sooners’ defense being unable to control Wildcats quarterback Adrian Martinez (234 yards passing, 148 yards and four TDs rushing) than anything else.

Against their first difficult opponent of the season — Maryland — the Wolverines found themselves in a battle, and McCarthy had his share of struggles.

He was occasionally indecisive in the pocket, at one point taking a hit that caused a fumble (recovered by a teammate). And he also tossed what would have been an interception if the defensive back had managed to stay in bounds.

J.J. McCarthy passed for 220 yards and two touchdowns as No. 4 Michigan beat Maryland.

Richardson has been in a bit of a funk since bursting on the scene with a Week 1 win over Utah. Certainly, Saturday’s loss at Tennessee will not help his Heisman cause.

Still, passing for 453 yards and a pair of touchdowns against the Vols (on only 24 completions) could serve as a bit of an eye-opener. He also rushed for 62 yards and two more TDs on the ground.

The fumble and the interception speak to Richardson’s lack of seasoning, so it might be an uphill climb to the Heisman this season. But what about down the line?

Gators quarterback Anthony Richardson took it in himself for a 6-yard rushing touchdown against Tennessee.

Next: Vs. Eastern Washington on Oct. 1.

The Longhorns suffered a 37-34 overtime defeat at Texas Tech, which isn’t great.

But Robinson rushed for 101 yards and two touchdowns on just 16 carries, which is very good!

Unfortunately, he also lost a fumble — in overtime. That, combined with the loss isn’t going to help his chances.

Fans RUSH the field after Texas Tech’s upset of Texas

The Texas Tech Red Raiders forced a costly Texas fumble to pick up a 37-34 OT victory.

The Volunteers are 4-0 after Saturday’s victory over Florida, and Hooker is a huge reason.

The senior was simply dominant against the Gators, completing 22 of 28 passes (78.6%) for 349 yards, two touchdowns and no interceptions. He also rushed for 112 yards and score on 13 carries.

That’s about as Heisman-quality a performance as you can get.

– Michigan has weaknesses, but a true star to lead the way

– CFP, Heisman and other predictions from FOX Sports staff

– Pac-12 is back in the spotlight, for all the right reasons