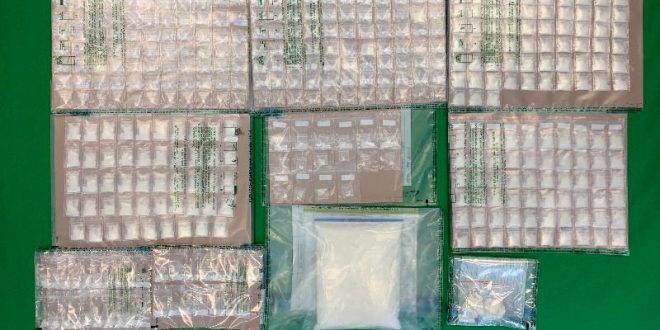 During an anti-narcotics operation conducted in Sheung Shui yesterday evening, Customs officers intercepted a 23-year-old man and escorted him to a residential premises nearby where about 1.1kg of suspected ketamine, about 120g of suspected crack cocaine and a batch of drug packaging paraphernalia were seized. The man was subsequently arrested. After follow-up investigation, Customs officers further seized a small quantity of suspected ketamine and suspected crack cocaine in his private vehicle.

Under the Dangerous Drugs Ordinance, trafficking in a dangerous drug is a serious offence. The maximum penalty upon conviction is a fine of $5 million and life imprisonment.

Members of the public may report any suspected drug trafficking activities to Customs’ 24-hour hotline 2545 6182 or its dedicated crime-reporting email account (crimereport@customs.gov.hk).