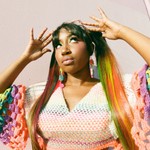 Tate’s mother saw potential early on and nurtured her innate musical sensibilities by sending her to a performing arts high school, DeKalb School of the Arts. Tate refined her skills as an artist by truly learning her craft inside and out, studying classical music, Italian Arias, and everything in between. Years later, Tate can do it all. She can sing, rap, write and perform with ease, making her impossible to box in.

Then, there are the more slow-burning effects those beloved Jersey summers had on Tate, like her now-unshakable confidence, instilled in her by her cousin Taylor.

“Every time I’d go up there each summer, Taylor would tell all her friends, ‘My cousin can sing! My cousin can sing!’” she recalls. “She’d make me sing for all of her friends, and she said to me, ‘Look, you better use it, or you gon’ lose it.’” Those words would echo in Tate’s head for the rest of her life, and strengthened after her cousin passed. “God rest her soul, but she was one of my biggest supporters,” says Tate. “Going up to stay with her definitely strengthened my confidence. I just saw how loved she was and how confident she was, and she put her confidence in me.”

Confidence is now perhaps the main facet of Tate’s brand as an artist. As if it weren’t obvious from her striking outfits — whether it be an on-stage ensemble or just going to the store — Tate never misses an opportunity to throw on a vibrant, show-stopping fit. That may be why people gravitated towards her current most successful single, “I Am,” which sees an assist from fellow rising star Flo Milli.

Beautiful affirmations lead the track: “I am healthy, I am wealthy, I am rich, I am that b—h/ I am gonna go get that bag, and I am not gonna take your s–t.” The song sticks because when Tate raps “that b—h” with conviction, it’s pretty easy to believe every word she’s saying there on out.

Tapping in with peers like Flo Milli is also a prevalent practice for Tate, as she makes it her mission to lift as she climbs constantly. The aforementioned GIRLS album is Tate’s hand in fostering a more collaborative environment amongst fellow female artists and solely includes appearances from women. The project boasts features from names like Latto, Bbymutha, Baby Rose, Kari Faux, and many more. Seeing her genuine intentions, the ladies she reached out to were more than happy to be on board.

Through this radiating authenticity and love for collaboration, Tate has fostered a genuine support system on social media, casually tweeting back to fans all the time and frequently uploading raw, uncut videos that show off her hilarious personality. She loves to post about astrology, repping her set amongst her fellow Earth signs as a proud Taurus bull. “I think I fit pretty much all of the Taurus traits,” she says as she lists off many of the Taurus stereotypes, fully claiming the positive ones and even ultimately owning the negative ones, as well.

Tate says she is hardworking, loyal, indulgent, and food-obsessed like a Taurus. She also interprets more negative traits like the “lazy” stereotype as her needing to be highly comfortable wherever she is. Tate is also fully self-aware that she can be very stubborn at times. “I’m not stubborn in a way that I’m not open to new ideas, nor am I closed-minded,” she justifies. “But if I have my mind and heart set on something and I know the way I want it to be done, it’s tough for someone to sway my mind. I stick to it.”

Tate’s stubbornness and gut instinct has so far paid off, winning over Hollywood powerhouse Issa Rae, who signed the artist to her Raedio label in 2020. The partnership made complete sense to Tate, who knew exactly what she wanted out of a contract after closely watching her mother go through her journey as an artist.

There’s a lot for Yung Baby Tate to be excited about these days. She’s a member of the newest season of Love and Hip Hop: Atlanta, and her freshly released 2021 project After The Rain (Deluxe) is doing well. With her first Grammy win already under her belt (thanks to her appearance on Dreamville’s Revenge of the Dreamers III in 2019), a growing fanbase, and a bright future ahead, Yung Baby Tate continues her journey upwards, just like her cousin Taylor told her she would during those summers together.

“After my cousin passed, I realized she’s right,” says Tate. “I have to go after this 100%. There’s nothing else I should be doing and this is my calling.”