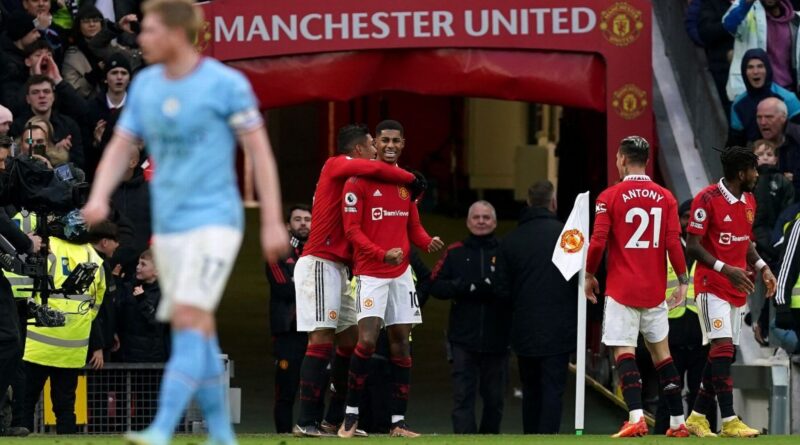 MANCHESTER, England — After scoring the winner in the 189th Manchester Derby, Marcus Rashford stayed on the Old Trafford pitch to fulfil his postmatch media duties. That done, he saluted the Manchester United fans who had stayed behind to celebrate the 2-1 comeback win over Manchester City in the Stretford End and was greeted with a rendition of his song: “Like Manchester, Rashford is red.”

The terrace chant has been heard a lot recently as Rashford has gone on the best goal-scoring run of his career. His close-range finish past Ederson in the 82nd minute against City stretched his streak to at least one goal in seven straight games. The last time he played at Old Trafford and didn’t find the net was against Tottenham on Oct. 19.

Rashford is a player revitalised under manager Erik ten Hag, after the Dutchman inherited a forward who had scored just five times in 32 games in the 2021-22 league campaign. To put that into context, the 25-year-old has already scored five goals in 2023 and the year is only 14 days old.

Saturday’s win moved United to within a point of second-place City (six behind Arsenal) and if that means Ten Hag’s team are genuine title challengers, how long the tag lasts will depend, in part, on how long Rashford keeps scoring. New loan striker Wout Weghorst, signed on Friday, watched the derby from the directors box and the hope is that the Dutchman will be a valuable option in the second half of the season.

Nonetheless there are question marks about whether there is enough firepower in the squad to continue the push in four competitions. Cristiano Ronaldo has gone and there is no date for Jadon Sancho’s return to action following a spell away to address his dip in form. Anthony Martial had to pass a fitness test before being picked to start against City but lasted just 45 minutes and was substituted at half-time. Teenager Alejandro Garnacho helped change the game when he was introduced in the 72nd minute but beyond that, the only other attacking option on the bench was Anthony Elanga, who hasn’t scored all season.

Speaking after Saturday’s win, Ten Hag was grateful to Rashford for carrying on despite appearing to suffer a groin injury towards the end of the first half. After chasing City defender Kyle Walker into the corner, he fell to the floor while his holding the top of his left leg and slammed his hands down onto the turf in frustration. When Antony came out to warm up at half-time, the assumption was the Brazilian winger would replace Rashford, but instead it was Martial who came off.

For Ten Hag, it was a sequence that pointed to Rashford’s new-found resilience and he was rewarded with a key role in the comeback. While many will debate whether the striker interfered with play in Bruno Fernandes’ goal to make it 1-1, the goal stood and, minutes later, he had his fifth derby goal to seal the win. It also said a lot that Rashford was in the right place to score the winner from Garnacho’s cross despite missing two good chances in the the first half, one cleared off the line by Walker.

“He knows that in top football you have to suffer and sacrifice,” Ten Hag said. “You have your painful moments, especially a player like he is, he’s unstoppable. Opponents will go tough against him to stop, but you have to deal with it. I think he is capable of it. He keeps going and keeps focusing on his chances. In the end he got rewarded and the team got rewarded.”

When United were at their training camp in Spain during the break for the World Cup, Ten Hag felt emboldened to compare Rashford to Paris Saint-Germain forward Kylian Mbappe in style. It was a big statement from the United manager but after eight goals in seven games across all competitions, it’s not looking that outlandish.

The point Ten Hag was trying to make was that while Rashford has always had the physical and technical attributes to be considered among the best in the world, it’s consistency that sets the apart the truly top players. He has found it since returning from Qatar and looks like the player United fans hoped he would become when he burst onto the scene as an 18-year-old in 2016. If he carries on scoring, not only will he pass his previous best tally for a season of 22 — his goal against City was his 16th across all competitions — but he will also encourage more comparisons with the likes of Mbappe.

Ten Hag needs Rashford to maintain his form for long enough to allow him to bed in Weghorst and get Martial back to full fitness otherwise the progress being made could be hampered by a lack of cutting edge.

Rashford’s goals have propelled United into title contention and got fans dreaming of a first Premier League title since 2013. His latest effort was enough to ensure a first derby win at Old Trafford since 2020 and back up the chant that, like Rashford, Manchester is red.