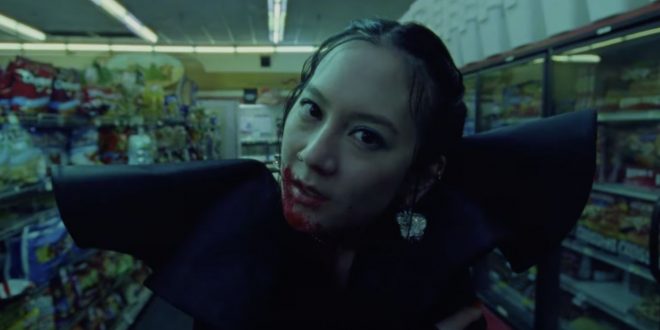 Although her third album Jubilee isn’t set to be released until June 4, Japanese Breakfast is certainly keeping her fans well-fed with fresh tunes. On Thursday (April 8), the 32-year-old singer-songwriter, born Michelle Zauner, unveiled a slew of brand new tour dates and an eerie, dreamlike music video for “Posing in Bondage,” the second single from her upcoming album.

The atmospheric, self-directed clip sees Zauner bloodied and chugging orange juice from a plastic jug as she rolls through a grocery store on a hoverboard in the early hours of the morning. While hosting a YouTube Live before the video’s premiere, the singer said she drew artistic inspiration for the project from Björk’s “All Is Full of Love” and Solange’s “Lovers in a Parking Lot” music videos, as well as the Netflix series Stranger Things.

“There was supposed to be a robot in this video,” she revealed. “It did not happen.”

When explaining the meaning behind the song, Zauner said in a statement, “‘Posing in Bondage’ is a ballad about loneliness and longing, a song about two people who want so badly to connect but are never quite able to do so. No place felt lonelier than an empty grocery at 1 a.m.” And speaking of grocery stores, her memoir, Crying in H Mart, named after the Korean-American supermarket chain, is out April 15 too.

Speaking later on YouTube Live, Zauner hinted that the music video for “Posing in Bondage” is an “epilogue” to a forthcoming single that is slated to be dropped on a to-be-announced date before the album’s June release. “I probably shouldn’t reveal too much, but this ended up being an epilogue that comes before another video,” she said. “There’s going to be one more single before the album releases on June 4 and I can’t wait for you to see it. It’s epic. I think it’s maybe our best video yet.”