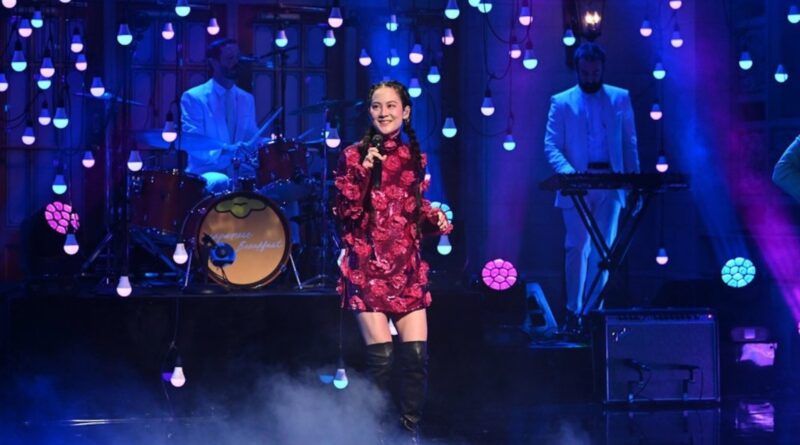 The pair of songs are featured on the group’s 2021 album, ‘Jubilee.’

That’s a wrap! Japanese Breakfast, the alt-pop brainchild of musician and author Michelle Zauner, made their musical guest debut during the season 47 finale of Saturday Night Live on May 21.

In the Natasha Lyonne-hosted episode, the group delivered a pair of songs from their 2021 album, Jubilee. The indie pop outfit opened with with the springy and rhythmic single “Be Sweet” and closed with a visually stunning performance of “Paprika.”

Zauner also made a brief cameo in a sketch titled “Women’s Commercial.” The skit also featured SNL cast members Kate McKinnon and Aidy Bryant, who are departing from the iconic comedy series after this season.

The 33-year-old musician, who is currently touring North America, will soon be celebrating the one-year anniversary of her June 2021 album, Jubilee. The set follows Zauner’s grief-examining memoir, Crying In H Mart, and debuted at No. 56 on the Billboard 200 and No. 2 on the Tastemaker Albums chart.

Saturday’s episode marked the SNL debut for both Zauner and Lyonne. After an action-packed 47th season, the late-night show will go off the air for the summer.

Watch Japanese Breakfast’s SNL performances below, and see the full episode on Hulu here. The streaming service is currently offering a 30-day free trial, which you can sign up for here.