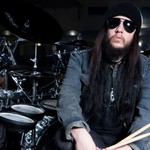 Slipknot and Jordison parted ways in 2013, though the drummer later said in interviews that he was sacked. Fans of Slipknot would continue to follow his journey.

A fierce drummer who was widely considered one of the best in the business, Jordison would struggle with a disease called transverse myelitis. His illness reportedly took the use of his legs and stripped him of his ability to play his instrument.

The music community is mourning Jordison’s death, as artists and bands turn to social media to share their thoughts and memories of a master in his art.