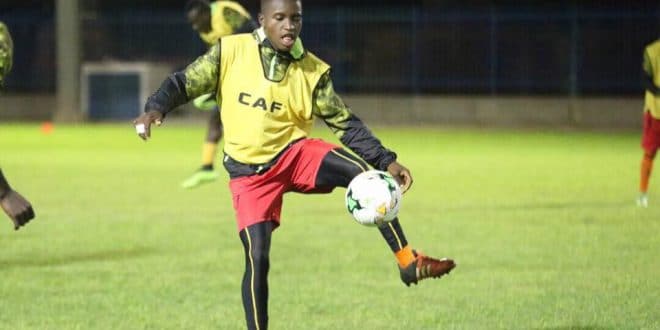 KCCA Young-star Scores First Continental Goal As They Bow Out Of League.

KCCA  youngstar Allan Okello has continued to prove his worth on the team as he scored his debut continent  goal in a match where they were versing Egyptian giants Al Ahly in a thrilling 4-3 loss in Alexandria.

The youngstar scored the third goal in the 81 minute beating  world cup goal keeper  El Shenawy  from 25 yards to make it 4-3 in the second half.

Jackson Nunda had given KCCA hope as he headed Mustapha Kizza’s  cross into the net to make it 1-1at ahlf time as Wlid Azarou had put the hosts in the lead after 23 minutes of the match.

The second half started in disaster for KCCA side as Souleymane Coulibaly scored the second to give put the hosts back in the lead, however the red devils’ joy was cut short as Peter Magambo who was making his debut appearance on continent scored to make it level for KCCA.

Drama continued in the second half as Patrice Caryeron’s boys scored a third one through Azarou putting them back to the lead.

Seven minutes later as KCCA looked for a way back in  the game, Morwen Mohsen scored to fourth to burry KCCA hopes of a come back.

Eight minutes later its when Allan Okello cut the deficit to one  although it was nott enough for his team to make a come back In the game.

KCCA had  beaten  the hosts 2-0 at Namboole in the first encounter.

KCCA finished third in the group with 6 points as the hosts topped the group with Esperance coming second with 11 points and township rollers coming last with only 4 points.