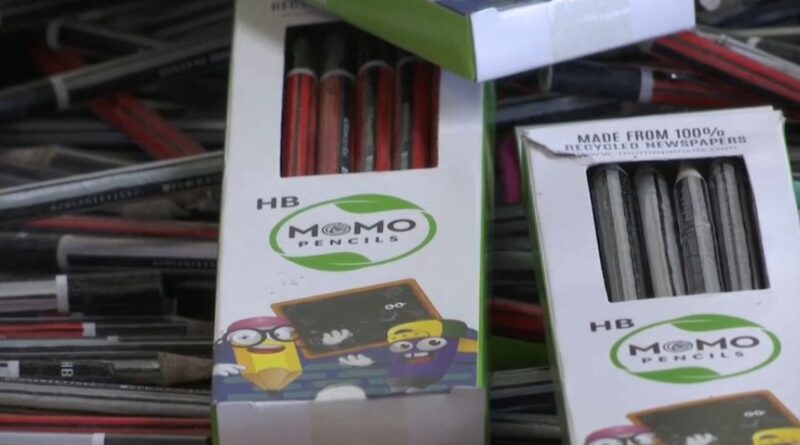 MOMO Pencils, based in Athi River, Machakos County, came up with an effective way to reduce the number of trees cut down every year to make simple writing pencils.

The company, headed by brothers Mahamud Omari and Rashid Omari, sources its raw materials, in this case glue and old newspapers, locally. They currently import the graphite.

He says the price of the finished product depends on the quality and quantity, but it ranges from KSH 15 to up to KSH 50 per-pencil.

Pencils are an important part of life, they’re used for sketching, drawing and in schools.

The United Nations says some eight million trees are cut down every year to make pencils, contributing to deforestation.

came up with an effective way to reduce the number of trees cut down every year to make simple writing pencils.

“If you look at the present day, we are suffering from climate action and the best way is to reduce the number of trees that are cut for any purpose,” he says.

“So, for that matter, 82,000 trees that are cut every year to make pencils, we provide an alternative. We take the newspaper and turn it into a viable product which is a pencil, providing an option for those people to use instead of wooden pencils.”

The process of making pencils starts with newspaper collection.

The newspapers are cut into the right size, then graphite is glued to the pieces.

The pieces of newspapers and graphite are then put into a roller, which rolls and compresses them into pencils.

They’re then left in the sun for three days to dry off.

They’re lastly put into a final compressor, sharpened and packaged.

Mahamud says in the next five years, the company aims to ensure every child in Kenya will use their pencils.

“We want each and every child in Kenya who goes to school to use our pencils and at the same time, be able to plant a tree through our pencil. That way we will reduce the number of trees cut,” he says.

“We will also provide an option and reduce the number of wooden pencils in the market.”

Sustainability consultant and climate change expert Nickson Otieno believes such efforts will reduce the number of trees cut down, while at the same time reducing the amount of wastepaper that’s dumped or burnt.