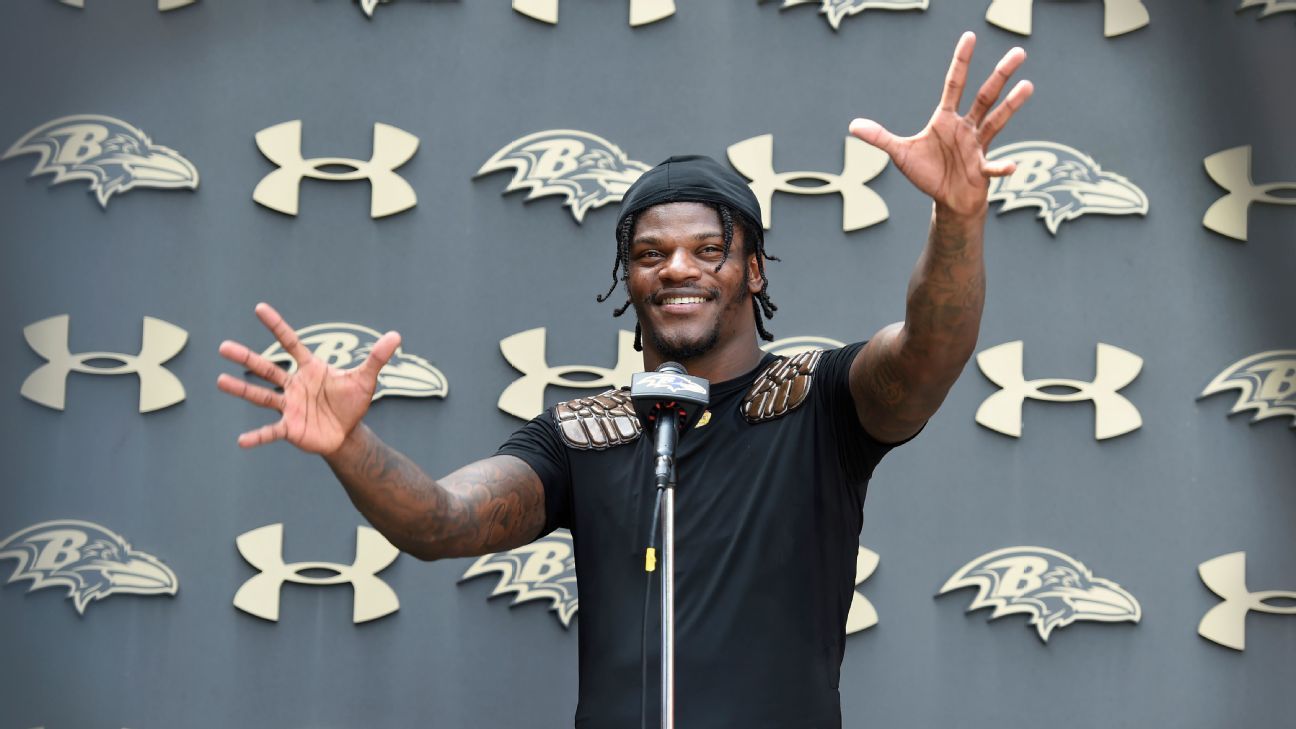 Lamar iffy on vaccine despite 2nd bout of COVID

OWINGS MILLS, Md. — Baltimore Ravens quarterback Lamar Jackson was noncommittal on whether he would get vaccinated after being infected with COVID-19 twice in the past eight months, saying it was a “personal decision.”

“I just got off the COVID list,” Jackson said after Monday’s practice when asked if he would get the vaccine. “I got to talk to my team about this and see how they feel about it. Keep learning as much as I can about it. We’ll go from there.”

Does that mean he’s thinking about getting vaccinated?

During Jackson’s nine-minute media session, the former NFL MVP remained loose, animated and playful while being asked nine COVID-related questions, including three on whether he planned to get vaccinated.

Jackson returned to training camp Saturday after missing 10 days, the NFL-mandated quarantine for unvaccinated players who test positive. Last November, Jackson tested positive for COVID-19 and missed one game. On Monday, he acknowledged he dealt with the same symptoms from the coronavirus this time and slept a lot because of fatigue.

Jackson said last December that he “wouldn’t wish [COVID] on anybody” and reiterated that Monday. But he still wouldn’t budge on whether he would get the vaccine, even when pressed that it puts the Ravens at a competitive disadvantage.

“I feel it’s a personal decision,” Jackson said. “I’m just going to keep my feelings to my family and myself. I’m focused on getting better right now. I can’t dwell on that right now … how everybody else feels. Just trying to get back to the right routine.”

Jackson is one of the few players on the Ravens who have not been vaccinated. The Ravens entered training camp with a 90% player vaccination rate, coach John Harbaugh recently said.

Asked about his reaction when he found out he had tested positive a second time, Jackson mouthed some words angrily and waved his arms in disgust.

“What the … again?” Jackson said, cracking a smile. “It was crazy. I was heartbroken. I wasn’t looking forward to that at all. Right before camp … not again, not right now.”

Harbaugh said Jackson “got hit pretty hard with the symptoms,” and he thought Jackson looked better than expected in his return to practice. Jackson had to undergo tests Friday before being medically cleared to return to the field. In his two practices, Jackson has shown no signs of being ill, scrambling and throwing passes on the run like he typically does.

Jackson, 24, said he was not worried about the long-term effects from getting COVID-19.

The Ravens are currently in talks on a long-term deal with Jackson, although nothing is imminent. On Friday, the Buffalo Bills signed Josh Allen to a six-year, $258 million extension, making him the first quarterback of the 2018 draft class to land a new deal.

On Monday, Harbaugh said Allen’s deal doesn’t have an immediate impact on Jackson’s situation in Baltimore.

“Nothing’s changed in a sense of, it’ll happen when it’s going to happen [and] when it’s best for both sides to happen. Both sides want it to happen,” Harbaugh said. “There’s really not a hurry on it. Lamar is going to be our quarterback for many years to come. We want him and he wants us. We’re focused on what’s important now, which is a good practice. That kind of a question isn’t relative to what we’re trying to do right now.”

There’s no urgency because Jackson is under contract through the 2022 season and Baltimore has a limited amount of salary-cap room this year.

“I’m not worried about it,” Jackson said about a new deal. “I’m just trying to work at getting better right now. I just got off COVID. I’m worried about my teammates. We’re trying to get somewhere. Time will come about that.”