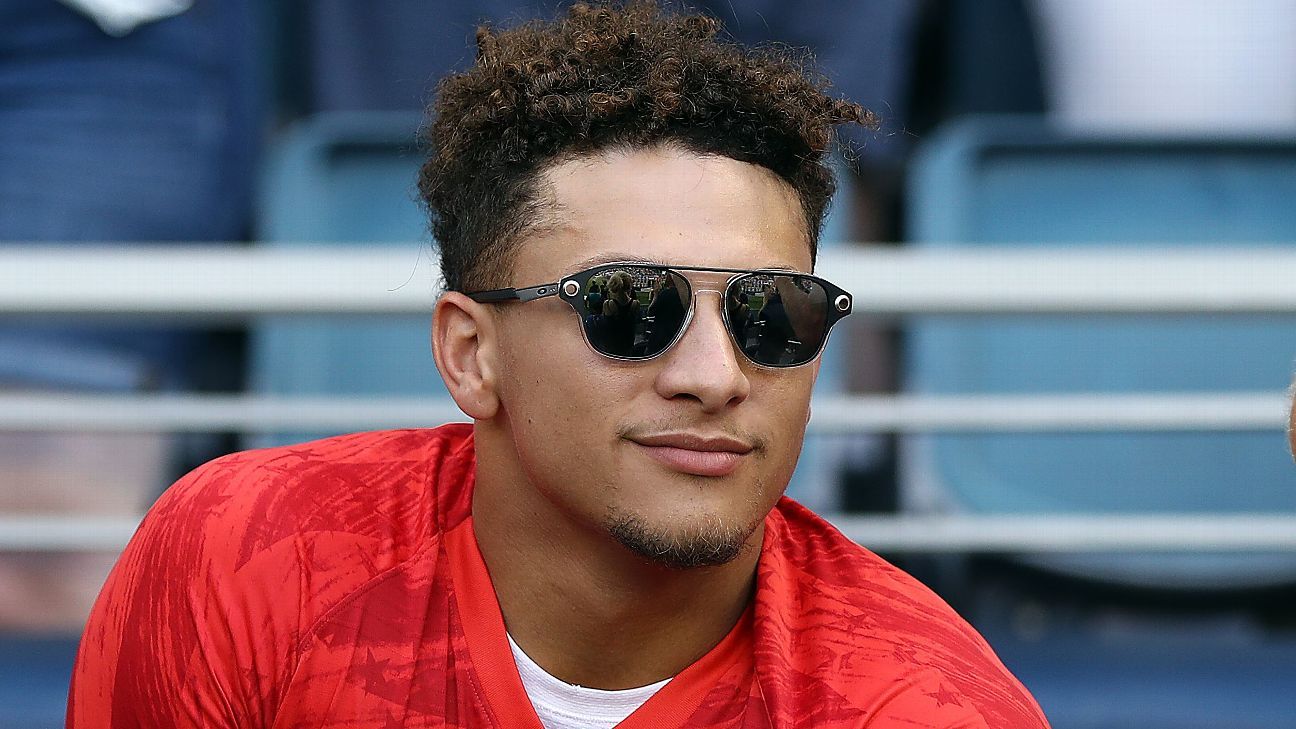 The 25-year-old, currently preparing for his fifth NFL season, has added a percentage of his local soccer team to his burgeoning portfolio of local sports franchises.

This comes after Mahomes bought into the ownership group of the Kansas City Royals baseball team last year, while fiancee Brittany Matthews is a co-owner of Kansas City’s National Women’s Soccer League franchise.

“I am grateful for the opportunity to join Sporting Kansas City’s ownership team and strengthen my connection to the fans and the city I love,” Mahomes said. “Sporting is a community-oriented club, and I am excited to continue supporting the growth of soccer in Kansas City.”

Mahomes was named 2018 NFL MVP and led the Chiefs to victory in Super Bowl LIV, after which he signed the biggest contract in the history of sports. The Chiefs returned to the Super Bowl the following season in 2020, losing to the Tampa Bay Buccaneers.

Sporting KC are riding high in the MLS Western Conference table, sitting in second place after making an impressive start to the 2021 campaign, just two points off the Seattle Sounders at the summit. After reaching the quarterfinals of the playoffs last season, Sporting KC fans will be hoping that getting a proven winner like Mahomes on board could inspire them to their first MLS Cup triumph since 2013.

Mahomes joins an increasing number of famous faces to dabble in the world of football ownership. Whether it is ex-footballers like David Beckham (Inter Miami CF), dominant athletes in other sports like Kevin Durant (Philadelphia Union) and LeBron James (Liverpool), music icons like Elton John (formerly the chairman of Watford) or Hollywood stars like Ryan Reynolds (Wrexham) or Will Ferrell (LAFC), club ownership is becoming an increasingly appealing proposition to celebrities.

It might be a passion for the sport, a personal connection, strictly business or, frankly, just because they can, but we are seeing more and celebs dipping their toes into football ownership for all sorts of reasons. In that vein, we looked at other celebrities who have ownership stakes in football clubs around the world.

This article has been updated since it was first published on June 16, 2020

Actors Reynolds and McElhenney joined forces to spearhead a surprise Hollywood takeover of Wrexham in November of 2020, with the club sitting 14th in the fifth-tier National League. The 157-year-old Welsh club have been playing non-league football since 2008 when they last dropped out of the Football League, but that didn’t dissuade Reynolds and McElhenney from vowing to awake the “sleeping giant” and transform the Red Dragons into a “global force.” Wrexham went onto finish 8th in 2020-21, missing out on the playoffs by a single point, some way short of their highest ever league finish: 15th in the old Second Dvision (now the Championship) back in 1978-79. The duo have been having lots of fun in their new role as sports owners, and a TV show about their adventures at The Racecourse Ground is in the works.

NBA superstar Kevin Durant announced in June 2020 that he had purchased an ownership stake in Major League Soccer’s Philadelphia Union. The Brooklyn Nets forward and former NBA MVP bought an initial 5% stake in the club with an option to purchase an additional 5% in the future. The move “just made sense” according to Durant, who twice previously made attempts to join the ownership group of D.C. United. “I’ve been a fan of the sport, and then seeing how fast the popularity of the league was growing, seeing more fans pop up in different cities around the country, and then seeing how these franchises impact the city’s businesses and people individually was very intriguing,” Durant told ESPN in an exclusive interview at the time. Just a few months after Durant came on board, the Union claimed the Supporters’ Shield as the first-placed team in Major League Soccer’s regular season.

The Los Angeles Lakers superstar has won four NBA titles, four league and finals MVP awards and has been an All-Star 17 times, and also owns a minority stake in Premier League club Liverpool. The future Hall of Famer bought 2% of the Merseyside club in 2011 for $6.5 million, and has that investment paid off! In 2018, Business Insider reported that James’ $6.5m investment was worth $32m. Since then, Liverpool have won the Champions League and been crowned Premier League champions for the first time in 30 years, so suffice to say, James has over 32 million reasons to belt out “You’ll Never Walk Alone”!

LAFC is in its fourth season in MLS, but the Los Angeles new boys already have a real Hollywood feel to them. While the majority of the club is owned by local investors Brandon Beck, Larry Berg and Bennett Rosenthal, comedian Will Ferrell, NBA Hall of Famer Magic Johnson, ex-USWNT legend Mia Hamm and Hamm’s husband and former MLB All-Star Nomar Garciaparra all also own a stake in The Black and Gold. On the field, LAFC has been one of the league’s best and most exciting clubs since its inception, winning the Supporters’ Shield in 2019, while off it there have been plenty of laughs thanks to Ferrell. The former “Saturday Night Live” star — also a Chelsea supporter — marked the side’s first-ever contest by conducting an interview with ESPN as “Anchorman” character Ron Burgundy.

Kevin Durant isn’t the first NBA superstar to invest in an MLS club, as his former Oklahoma City Thunder teammate James Harden beat him to the punch by purchasing a 5% stake in the Houston Dynamo in July 2019. The Dynamo, who also count former world champion boxer Oscar de la Hoya among their owners, missed the playoffs in Harden’s first season aboard but are valued at a lofty $475m. The club even made him feel at home by giving their entire roster “The Beard” treatment on the club’s official site.

An ever-present at Vicarage Road, the British pop icon has owned Watford on two separate occasions, first from 1976 to 1987 and later from 1997 to 2002. Still an honorary life president of the club, John regularly attends Watford home matches and even had a stand named after him in 2014. John’s first spell as chairman coincided with Watford rising from the fourth tier to the top flight, highlighted by a second-place finish in 1983 and an FA Cup final run in 1984. The artist’s hit “I’m Still Standing” was named the Hornets’ official club anthem in 2019, while John’s son Zachary joined Watford’s Academy in 2018.

The actor, comedian and game show host became one of the first American celebrities to get into soccer ownership when he bought a 7.5% stake in MLS expansion side Seattle Sounders in 2007. An avid Cleveland sports fan, Carey first became interested in soccer after visiting Spain and his love for the game has only blossomed from there. The “Whose Line Is It Anyway” and “Price is Right” host’s involvement with the Sounders has been fruitful as Seattle has won two MLS Cups (2016, 2019) and emerged as one of MLS’ most valuable clubs. Carey is not an absentee owner, either, as he regularly attends home games and serves as the president of Sounders FC Alliance, the club’s official membership group

“Alright, alright, alright.” The “Dazed and Confused,” “Lincoln Lawyer” and “Wolf of Wall Street” star bought into his beloved college city’s foray into soccer in 2019. Austin FC then joined MLS in 2021, making their league debut with a fairly underwhelming run of six straight defeats. Arguably, the franchise had already scored their first major victory by managing to get McConaughey — the unofficial mayor of Austin — on board in the first place. Their first league points came courtesy of a resounding 4-1 drubbing of Portland Timbers in early July. This was after McConaughey had delivered a motivational drum performance before the previous home game against San Jose Earthquakes in scenes eerily similar to his chest-thumping, rhythmic-humming, trance-like cameo in “Wolf of Wall Street.”

Everything Zlatan does seems to make headlines, so it was no surprise that the brash striker’s announcement that he was buying 25% of Swedish club Hammarby in 2019 ruffled some feathers. A product of the Malmo youth system, Ibrahimovic’s decision to invest in a rival club like Hammarby was labeled a “betrayal” in Malmo and even provoked Malmo supporters to vandalise and then topple a statue of the striker outside of the club’s home ground. Zlatan wasn’t too fazed by the backlash, calling the group “kindergarten level.” Remember, this is a man who has compared himself to lions, Ferraris and even God!

They love their sports and stars in Seattle, so it is fitting that Seahawks quarterback Russell Wilson and wife and Grammy award-winning singer Ciara joined the Seattle Sounders ownership group in 2019. At their unveiling as owners, the Pro Bowl QB called soccer a “transformational sport” and added that the unifying power and inclusiveness of the sport played a huge part in the couple’s decision to get involved.

Real Valladolid are a rather inconspicuous club, having flip-flopped between Spain’s Primera and Segunda Divisions for much of their history. That didn’t deter Ronaldo. The Brazil legend, who won two World Cups and two Ballon d’Ors during his illustrious playing career, bought a 51% share in the Spanish club in 2018 for €30m and now holds an 82% stake in the Blanquivioletas. Valladolid have played the past two seasons in La Liga, are currently 14th and look poised for a third consecutive campaign in the top flight.

One of the world’s most popular and successful DJs, Diplo is another celebrity who has a real affection for “The Beautiful Game.” The three-time Grammy award winner bought a stake in USL side Phoenix Rising in 2016 and makes up a star-studded ownership group that includes Chelsea legend Didier Drogba, Fall Out Boy bassist Pete Wentz and ex-MLB pitcher Brandon McCarthy. The club, which had the Western Conference’s best record in 2019, still has designs on joining MLS, and previously featured Diplo’s record label Mad Decent as a jersey sponsor.

Ex-NBA star Steve Nash’s love for football is well-documented, with the former point guard a die-hard Tottenham Hotspur supporter and an occasional Champions League analyst. Originally born in South Africa, Nash comes from a soccer family. His brother Martin earned 38 caps for Canada, while his sister Joann captained her college soccer team for three years. The former Phoenix Suns star and two-time NBA MVP first bought into his hometown Whitecaps back in 2008 and then Spanish side Mallorca in 2016. Nash’s investment in Mallorca (he was part of a group that purchased a $21m stake) has proved a masterstroke as Mallorca has earned back-to-back promotions and this season are back in La Liga for the first time since 2013.

The “Class of ’92” consisting of David Beckham, Gary Neville, Phil Neville, Ryan Giggs, Paul Scholes and Nicky Butt rose to prominence in Manchester almost 30 years ago, winning a combined 120 trophies at Old Trafford under legendary boss Sir Alex Ferguson. In 2014, five of the six returned to the Manchester area to purchase eighth-tier Salford City, whose ground resides just 5 miles away from the bright lights of “The Theatre of Dreams.” Beckham joined his former teammates by also buying a 10% stake in 2019, and the club has flourished since. Salford, thanks largely to the financial backing from the Class of ’92, has earned four promotions in five seasons to reach the fourth tier (League Two) and the Football League for the first time ever. The club unveiled a new stadium in 2017 and are the subject of the docuseries “Class of ’92: Out of Their League,” which is available on Netflix. Beckham has also struck out on his own, and he is the president and co-owner of MLS club Inter Miami.