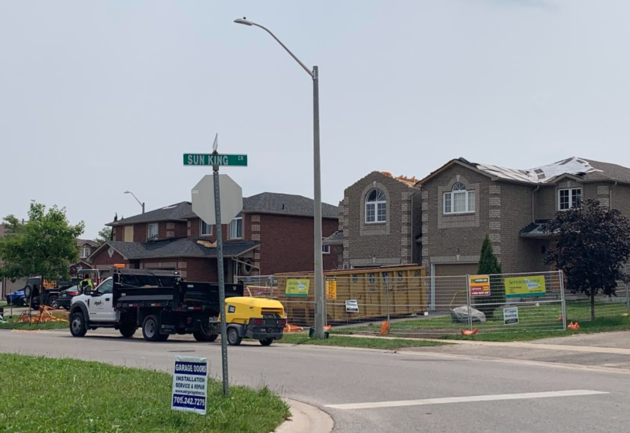 Charles Tonna is both amazed and grateful.

The kindness he’s experienced since an EF2 tornado blew the windows out of his south-end Barrie house, scattering glass and other debris throughout two weeks ago, has been overwhelming.

“The city of Barrie has been amazing,” said the Barrie real estate agent, who lives on Monarchy Street. “It’s remarkable.”

He’s had offers of help and support and even food.

Tonna says he considers himself lucky for not being injured when he ran out into the garage with his Yorkshire terrier to quickly seek shelter as the storm passed through.

And as he looks around his neighbourhood, he sees houses destroyed by the tornado just two doors down, another right next to it and the one right behind him and he is amazed at the randomness of it all.

Early estimates put the number of homes destroyed by the July 15 tornado at up to 20.

Although a structural engineer from a forensic engineering firm that services insurance providers whose crew is examining 33 structures in Barrie says very few houses he’s seen will have to come down completely.

“We set aside the financial implications and we look at: What is it going to take to safely and effectively put these people back where they were and most importantly, especially in this day and age, get them back into their houses as quickly as possible,” said Terry Smith, president of T. Smith Engineering.

“The majority of what we’re seeing is repairable,” he told BarrieToday.

What’s required now is proper inspection to determine what repair is needed and what the best methodology is, Smith added.

City officials say it’s too early to peg the exact damage and number of homes that need to be replaced.

So far, one permit for demolition has been issued. Smith says that’s related to a house that has to be taken down to the first floor. Another two permits have been issued for repairs.

Meanwhile, 70 unsafe orders for houses in the southeast Barrie neighbourhood remain outstanding, although 35 properties have been granted some sort of access.

City officials base the determination on access upon engineering reports conducted for insurance companies. It has received 51 reports for the houses with unsafe orders and another 34 for other damaged homes.

David Phillips, senior climatologist for Environment Canada, says the Barrie tornado has been the country’s most powerful and destructive for 2021 so far, and he fully expects to include it on his top-10 weather events in Canada at the end of the year.

“I found it interesting that there were six if not seven EF2 tornadoes on July 15,” said Phillips, who has been following weather patterns and severe storms since before Barrie was hit by the deadly F4 tornado in 1985, which was also among a series of tornadoes which hit the province that day — an occurrence that experts are saying occurs about every decade in Canada.