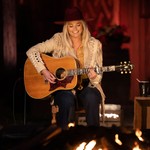 Leading into the October premiere, Austin City Limits shared a video clip of the trio performing “In His Arms,” from the May-released collaborative project The Marfa Tapes, a set of acoustic songs written and recorded in tiny Marfa, Texas.

“If it gets weird up here, it’s because we’ve all been friends for like, over 20 years,” Lambert says in the clip of the Austin City Limits performance. “I’ve grown up watching Jack since I was 15, been going to every club around Texas, following him around, one of my heroes. And Jon the same, we met … almost 20 years ago. He just sings like an angel and is an angel of a personality, and so, sitting up here with these boys, getting to sing songs we wrote in Marfa, Texas, I can’t believe it’s happening.”