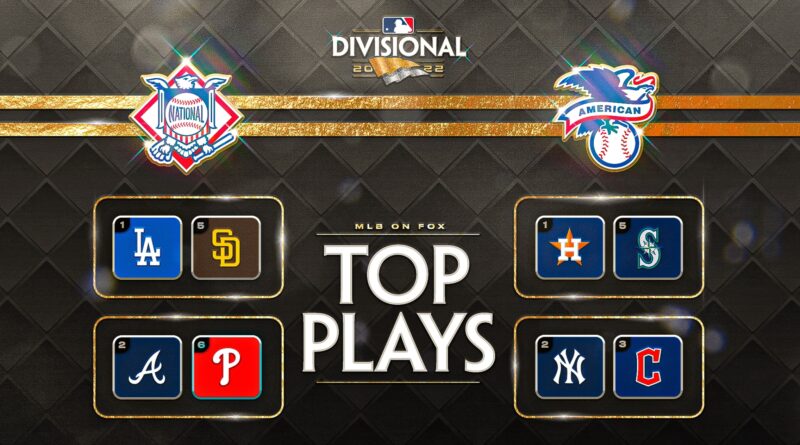 While the American League took a day off after Game 1, the senior circuit moved forward with a pair of NLDS Game 2s on Wednesday.

The Atlanta Braves evened up their series with the Philadelphia Phillies after a three-hour rain delay altered the start time. Out West, the San Diego Padres tied things up with the Los Angeles Dodgers.

Here are all the top plays from Wednesday’s Game 2s.

Starting off with a BANG

Manny Machado took Dodgers starting pitcher Clayton Kershaw deep to left field in the top of the first inning, giving San Diego a 1-0 lead. It was their first lead of the series.

Manny Machado cranks a solo home run to give the San Diego Padres a 1-0 lead over the Los Angeles Dodgers.

Freddie Freeman hit a solo home run off Padres starting pitcher Yu Darvish in the bottom of the first, evening the score at one apiece.

Freddie Freeman crushed a solo home run off Yu Darvish and brought the Los Angeles Dodgers to a 1-1 tie with the San Diego Padres.

Max Muncy hit the Dodgers’ second home run of the game to right-center field in the bottom of the second, giving them a 2-1 lead.

The Padres led off the top of the third with a pair of singles. Then Machado hit an RBI double down the left field line. San Diego tied the game at two.

Jake Cronenworth grounded out to first, but it scored Juan Soto from third. The Padres took a 3-2 lead.

Trea Turner joined the home run party for the Dodgers, launching a solo shot to left in the bottom of the third to even up the score once more.

The Los Angeles Dodgers are tied with the San Diego Padres at 3-3 after Trea Turner blasted a solo home run off Yu Darvish.

In the top of the sixth, Turner botched a potential inning-ending double play, putting runners on first and second. Jurickson Profar then punched an RBI base hit to right, giving the Padres a 4-3 lead.

Trent Grisham laid down a bunt, attempting to squeeze in a run, and Dodgers pitcher Brusdar Graterol made a superb off-balanced throw home to get the out.

Padres get out of trouble

San Diego brought in Robert Suarez out of the bullpen with runners on the corners and nobody out. The right-hander got a strikeout and then induced an inning-ending double play.

Jake Cronenworth barreled a ball deep into seats in right field off Dodgers reliever Blake Treinen, giving the Padres a 5-3 lead in the eighth.

The goose is loose

As the Dodgers tried to spark an eighth-inning comeback, a goose made its way onto the field. But as Padres reliever Josh Hader was inserted into the game, the goose was ushered away, and San Diego got out of the inning unscathed.

Despite a bit of late-inning drama, the Padres held on for a 5-3 win. It was their first in the divisional round in 16 years.

Game 3, scheduled for Friday evening in San Diego, will feature Padres lefty Blake Snell versus the Dodgers’ Tony Gonsolin, whose 2.14 ERA would have led the National league had he pitched enough innings to qualify.

Kyle Wright got off on the right foot for the Braves, putting down the Phillies in order to open up the first.

However, Zack Wheeler did the same for the Phillies.

Great catch … by the fan

A Braves fan made a nice snag on a foul ball hit by Matt Olson down the left field line.

Dansby Swanson made one of the best catches of the season in the top of the sixth. The shortstop ran out to left-center field and made a remarkable catch to get the Braves out of the inning. The game remained tied at nothing apiece.

With two outs in the bottom of the sixth, Olson snuck a groundball under Phillies first baseman Rhys Hoskins, scoring Ronald Acuna from second and giving the Braves a 1-0 lead.

One at-bat later, Austin Riley smacked an infield hit, scoring Atlanta’s second run of the game. Then the next batter, Travis d’Arnaud, punched an RBI single out to center field. Atlanta led 3-0.

Wright exited after tossing six scoreless innings, having struck out six while allowing just two hits with one walk.

With a runner on in the top of the eighth for the Phillies, Riley made an incredible catch in foul territory near the tarp for the second out of the inning. The Phillies didn’t threaten in their final outs.

Game 3 is set for Friday in Philadelphia, pitting Phillies star Aaron Nola against a yet-to-be-announced starter for the Braves. One of rookie sensation Spencer Strider or veteran Charlie Morton figures to be on the bump.